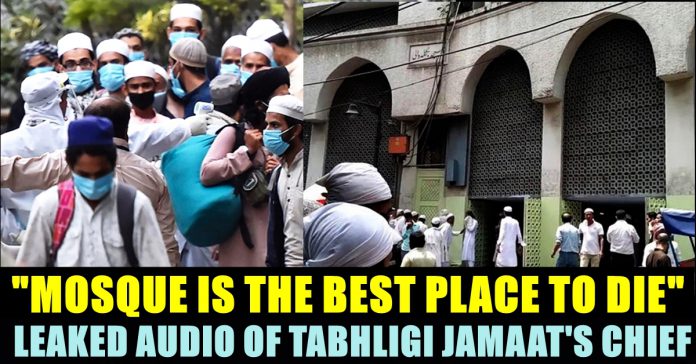 The sudden spike in the number of positive cases in Tamilnadu left the people of the state in utter shock. Followed by Maharashtra, Tamilnadu ranked at number 2 with 309 positive cases of Coronavirus. According to the statement of State Health Secretary Bheela Rajesh, Among the 309 patients, 185 of them were attended the three day Tablighi Jamaat conference at the Markaz Nizamuddin mosque in Delhi in mid-march.

As many as 1500 people attended the meeting and the state has requested the rest of them to volunteer themselves in order to cause no harm to their family and his surroundings. The government has identified 824 foreign nationals who visited the Nizamuddin Markaz. Meanwhile, an alleged audio conversation of Tablighi Jamaat’s chief Maulana Muhammad Saad Kandhalvi, is doing rounds in Internet.

The audio clipping, regarding which the Delhi police has started doing investigation, we hear Maulana Saad instructing his followers not to abide by government or medical guidelines which are implemented to combat the Corona outbreak. The man who is accused of holding a public gathering in contravention of public guidelines, is currently absconded and couldn’t be traced, according to reports. The audio clip which was streamed in India TV, Maulana Saad says, “If you think you will die if you assemble in a Masjid, let me tell you, there is no better place to die”

It is highly believed that thousand of people were present inside the Nizamuddin Markaz when this speech was delivered. “This is not the time when you leave your prayers or meeting people just because doctors are saying. When Allah has given the disease, then no doctor or medicine can save us” he says further.

“I feel pity for those who are saying that this is a time when people should not go or stay in mosques. This is not the time to scatter and leave mosques. If we gather inside mosques then all will create peace in the world” the voice in the audio clip says.

This audio clip indeed shocked the entire Internet. “MOST shocking part of #TablighiJamaat episode is this speech attributed to its Maulana Saad saying “if you have to die, a mosque is the best place to die in”, as people are coughing in background. Asked its lawyer about this. No clear answer.” wrote a reporter in her tweet.

MOST shocking part of #TablighiJamaat episode is this speech attributed to its Maulana Saad saying "if you have to die, a mosque is the best place to die in", as people are coughing in background. Asked its lawyer about this. No clear answer. Listen #Mojo https://t.co/fH5a3qliEt

Maulana Muhammad Saad Kandhalvi, 54 year old Indian Muslim, is the great grandson of the Tablighi Jamaat founder Muhammad Iliyz Kandhalvi. The latest report said that he is currently under self isolation on the advice of doctors. He has been booked by the Delhi police under the Epidemic Disease Act and the other sections of Indian Penal Code for violating government orders and for absconding.

Previous articleVijay, Ajith’s Director Slammed Public For Asking Them To Donate !!
Next articleHere’s How Internet Is Reacting To The Announcement Made By Our PM !!

After getting eliminated from the house, anchor Archana is pretty much active in social media platforms. Most recently, she uploaded a picture of herself...

A video that shows dance choreographer Robert forcing actress Rachitha Mahalakshmi to kiss him even after she says that he is like a brother...

Michael Vaughan Said Virat Kohli Must Be Rested From IPL !! This Tamil Actor Got Angry !!

Former England skipper Michael Vaughan believes that Virat Kohli should be given some time off ahead of the World Cup 2019 as Royal Challengers...