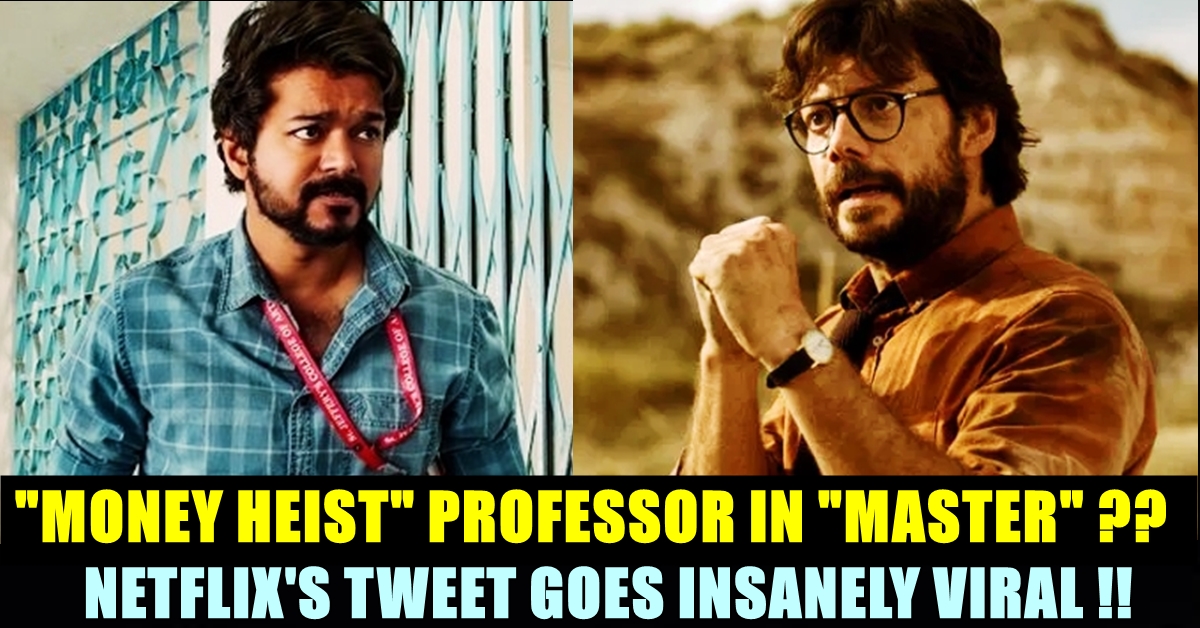 With less than a week to go for the theatrical release of Vijay’s most awaited “Master”, makers of the film are pretty much active doing promotions for the action thriller. Three promos were released so far and the producers released the exclusive stills from the film on Thursday which made the fans of actor Vijay go gaga over it. One of the posters contained a reference of “Professor” from “Money Heist” and Netflix reacted to it in the micro blogging social media site. Fans of “Professor” and “Vijay” couldn’t keep calm as they started trending the tweet with excitement.

“Master” was supposed to release during April month of 2020 and got postponed due to COVID 19 outbreak. Now, the makers have decided to release the film on 13th of January ahead of the Pongal festival. As soon as the official announcement was made, Lokesh has been appearing in youtube channels to promote the movie and the promotional videos are being released in daily basis.

Regarding the film’s core idea, Lokesh said that he got inspired to do “Master” story after seeing an interesting character in his home down. “I just observed him for five minutes and got attracted with the nuances of his behaviour. When I inquired about him, his back drop was interesting” said Lokesh while talking about how he got inspired to do “Master” said Lokesh and added that the film is a straight forward action entertainer.

Meanwhile, along with the promos, exclusive stills from the film got released lately. The stills seemed to have captured from the scenes of the film. Check out them below :

On seeing the reference of “Professor” in Vijay’s laptop, official twitter account of Netflix came up with a tweet linking both the characters. “Professor” character played by a Spanish actor named Alvaro Morte for the web series “Money Heist”. It became familiar in India as a large number Netflix subscribers finished watching it during intense lockdown.

On seeing the reference, Netflix came up with a tweet writing “Nice to see that the vaathi likes our vaathi” with a handshake emoji only to make the fans of both the actors go gaga. The tweet garnered 15k likes in no time and several kind of reactions are pouring. Few even got confused and speculated the film’s digital rights got conquered by Netflix.

Everyone who’s confused – @NetflixIndia was referring to “Money heist Netflix series professor” but the movie is with @PrimeVideoIN pic.twitter.com/AQnGxR5WDy