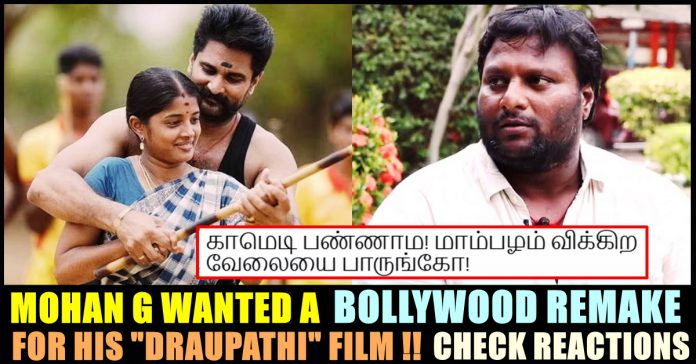 After seeing a news report on a Delhi advocate using his chambers to perform religious conversion and Nikaah, Tamil film director Mohan G uploaded tweet saying that his film “Draupathi” needs to be remade in Hindi to create awareness among public. It has been reported that a man made a legal complaint against the advocate, alleging that his daughter was converted and got married in the chamber of Iqbal. The news report made Mohan G to think of a “Draupathi” Hindi remake.

Draupathy film released in theatres on 28th of February of 2020 and ibecame a subject to controversy for the message it carried. The film which had actor Richard in the lead role became a commercial success as it was reportedly made with a budget that is less than a crore. The “Pazhaya Vannarapettai” fame Mohan directorial is highly believed to be a caste based low budget film against a particular community. However, the filmmaker firmly said that his film exposes the fake-love drama that takes place in the society.

Now, reacting to an incident that took place in Delhi, Mohan G expressed his wish of his “Draupathi” film getting a Hindi remake. “Delhi Bar Council temporarily suspends Advocate Iqbal Malik’s license for using his chambers for performing religious conversion & Nikaah. A man filed complaint that his daughter was converted & was thereafter married in Iqbal’s chamber, which was shown as mosque in documents.” tweet of a North Indian observer/analyst said.

A man filed complaint that his daughter was converted & was thereafter married in Iqbal's chamber, which was shown as mosque in documents.

It happens throughout India.. Someone has to make #Draupathi in hindi too.. https://t.co/yXmOWefOSZ

Many who came across this tweet of Mohan G, started dropping comments trolling the filmmaker for expressing his wish. “Self troll ah bro.. For a moment I thought it was the fake id..” a follower said whereas another one uploaded a picture of Prime minister Narendra Modi saying that the translator for the remake is ready.

Self troll ah bro ..For a moment I thought it was the fake id.. @mohandreamerr .. 😂

On the work front, Director Mohan G is busy making “Ruthra thaandavam” which is also going to have Richard as male lead. “Cooku with Comali” fame Dharsha Gupta has played the role of a female lead. The film is going to have renowned director Gautham Vasudev Menon is a special character annd the film is nearing its completion, according to the recent online posts of Mohan G. Have you watched “Draupathi “? Comment your views on the film getting a Bollywood remake !!