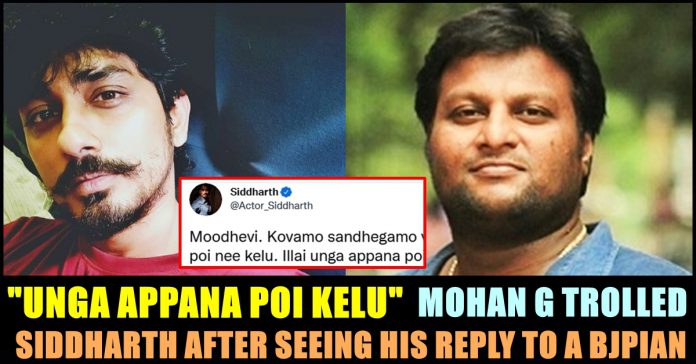 Mohan G of “Draupathy” fame took a sly dig at actor Siddharth after he slammed a BJP supporter who required condemnation from him for the demise of Dhanush, a student who committed suicide due to the depression over NEET examination. The filmmaker, indirectly denoted that Siddharth is a supporter of DMK party and doing his job of campaigning for the ruling party. The tweet of the filmmaker made the haters of the actor’s political opinions to gather and spew hatred at him.

Actor Siddharth who is known for raising voice against injustice that are taking place in the society through his official social media handle, lashed out at a supporter of the BJP party for tagging him in a tweet after addressing about the promise made by the DMK government on the NEET cancellation. Siddharth, after using some harsh Tamil words to express his frustration, said that nothing will blossom in the state. He also offered an Hindi translation for his tweet.

On Sunday, a news on a 20 year old student named Dhanush taking his own life due to the depression over attempting NEET for the third time, surfaced. He who belongs to Koolaiyur village of Salem district, was set to appear for the pre-medical entrance examination on Sunday, 12th of September.

During the evening of Saturday, Dhanush decided to take his own life due to the fear of failing in the examination for the third time. According to the youth’s family, he was severely depressed after failing to score the desire marks in the first two attempts and was studying for the exam till late night on Saturday.

However, after everyone went to sleep, Dhanush decided to take his own life, said reports. His mother Revathi who woke up at 4 in the morning, found him dead in his room. Relatives of the deceased urged government to take necessary actions to cancel the NEET format in the state.

Meanwhile, the incident sparked outrage with people questioning the ruling government which promised to cancel NEET. Leader of the opposition uploaded a tweet asking chief minister MK Stalin when he is going to reveal his secret about the plan on cancelling NEET.

A social media user went on to tag Tamil actor Siddharth and asked him why he is not raising his voice for the issue now. “Where is Siddharth who said that he would slap anyone who utters lie? ” the social media user whose Twitter bio says that he a supporter of BJP party questioned. Check out his tweet below :

Replying to him, the actor who got visibly frustrated, started slamming him in Tamil. “If you are angry or you are in doubt, show it yourself” Siddharth said in his tweet and went on to add that he is only doing his job. “You people have made my Twitter, a Toilet. Where it would blossom? Only in sewer. You want Hindi translation for this ?” his said through his tweet.

Pointing out the phrase “I am only doing my job” used by Siddharth in his tweet, Mohan G shared Siddharth’s tweet by adding laughing emojis. Here’s his tweet :

Check out the tweets that surfaced against actor Siddharth under Mohan G’s tweet :

Reacting to a tweet of a twitter user who asked Siddharth not to waste his time by reacting to such trolls, Siddharth wrote “Thambi… these lotus ke baals have been polluting my feed for a while. No brains, no integrity, just jobless idiots targeting and hating. I don’t need anyone else to clean my feed or fight my battles. Otherwise might as well leave this toxic platform.” in his tweet.

Thambi…these lotus ke baals have been polluting my feed for a while. No brains, no integrity, just jobless idiots targetting and hating.

I don't need anyone else to clean my feed or fight my battles. Otherwise might as well leave this toxic platform. https://t.co/samg2vCO95

Evidence For Srimathi’s Mother Meeting School Authorities On 13th July Is Out !!

A Picture of Srimathi's mother Selvi involving in a meeting with the school authorities on the day her daughter allegedly committed suicide got surfaced...