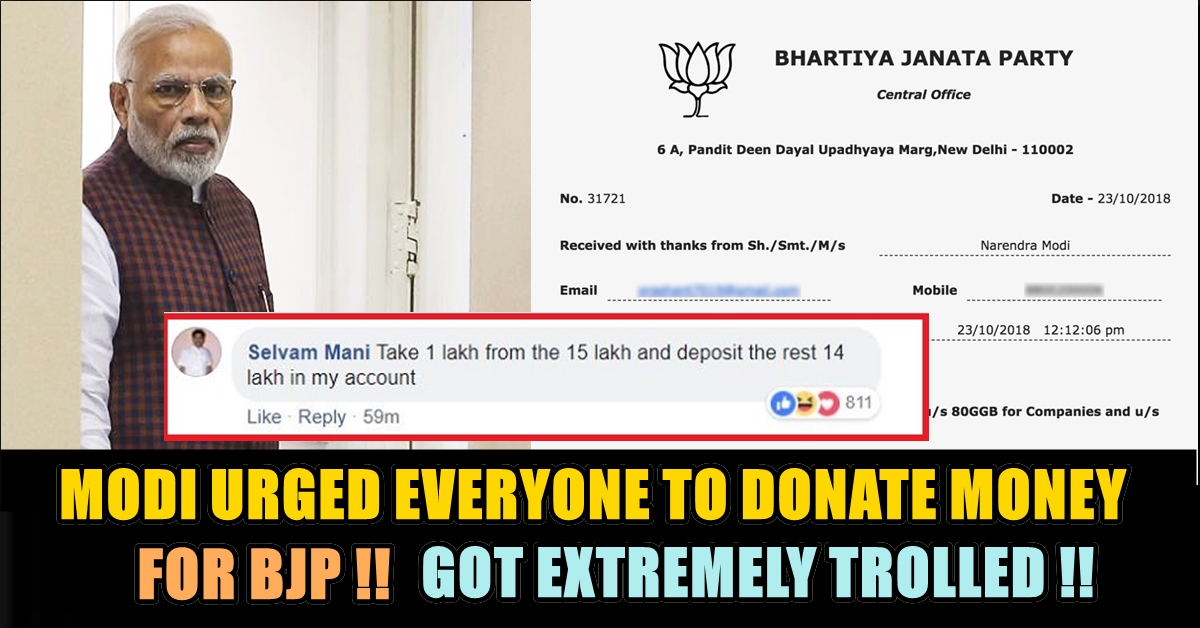 Prime Minister Narendra Modi Tuesday donated Rs 1000 to the BJP  through Narendra Modi app and urged people to contribute to the party. The prime minister in a tweet said that he urged everyone to spread the message of transparency in public life.

“You can contribute any amount from Rs. 5/- to Rs. 1000/- via the ‘Narendra Modi Mobile App.’ Your support and contribution will strengthen the resolve of our Karyakartas to serve the nation,” Modi tweeted. The move comes days after the Aam Aadmi Party launched a campaign to gather funds through a door to door campaign.

Several BJP leaders including the party chief Amit Shah and Minister of External Affairs Sushma Swaraj also made donations towards the party fund using the app and urged for increasing transparency.

Your support and contribution will strengthen the resolve of our Karyakartas to serve the nation. https://t.co/DLjNCtBzvg

But what happened in the comment section is absolute contrast that everyone started trolling Narendra Modi for the promise he has given in the past. Before becoming the Prime Minister of India, Modi in a public speech announced Rupees 15 lakh in Indian’s Bacnk account. He also promised individual house for every Indian.

Check out the trolls he received here :

What happened to 15 lakh per account that you were planning to give from the black money you were going to bring from abroad? Why are you asking people for money? You were supposed to give recovered money to people, not take money from them!

Sir u r also in need of donation. A party with highest rate of corporate funding wants donation from general public is a good joke.

Now that’s really hilarious. But we know Modi Ji has millions of supporters who will happily contribute to the party funds. Do you agree?