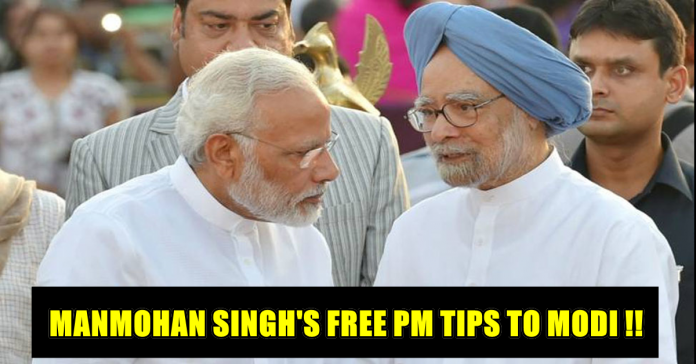 Modi Tastes His Own Medicine : Manmohan Singh Asks Modi To Speakup And Not Remain Silent In Crucial Occasions !!

Ex-Prime Minister Manmohan Singh, who when in power was repeatedly advised by the BJP-led opposition that silence on critical matters is not a virtue, has shared it with Prime Minister Narendra Modi.

Hitting out at Prime Minister Narendra Modi for his long silence over the rape and murder of an eight-year-old girl in Kathua and the alleged rape of a teenager by a BJP MLA in Unnao, former prime minister Manmohan Singh told The Indian Express that Modi “should follow his own advice to me” and “speak more often”. In an exclusive interview with The Indian Express, The former prime minister Manmohan Singh said that he was glad that Modi has finally broken his prolonged silence regarding the incidents on Ambedkar Jayanti. However, he added that the latter’s delay in raising the issue earlier had allowed people to believe that one could get away with heinous crimes without being penalised. In the wake of the Delhi gangrape in 2012, the Congress party and his government had taken necessary action by amending the laws around rape, said Singh.

Asked if J&K Chief Minister Mehbooba Mufti had handled the Kathua rape case properly, Singh said, “She could have handled this more seriously, taken matters into her hands right from the beginning and taken a firm stand” to bring the guilty to book without delay. He said that there may have been pressures on her from her coalition partner, the BJP, to go slow, especially since two BJP ministers — they have since resigned — in her government had come out in favour of the rape accused. “There are bound to be pressures…but if it is carried to such an extent that you can condone the sad demise of an eight-year-old girl having been raped and kept for a week in a temple, that is the most shocking thing,” Singh said. He also castigated many of the BJP’s state governments for ignoring matters related to women’s safety and lynching of Muslims and Dalits.

On the BJP referring to him as “Maun Mohan Singh”, the former prime minister said that he had lived with such comments for a long time.

Previous articleViewers Irritated On Arya’s Shocking Decision In Enga Veetu Mappillai Finals !! : Here’s Why !!
Next articlePeople Dislikes Modi’s Sweden Visit To The Core : Check Out Too See What They Have To Say !!