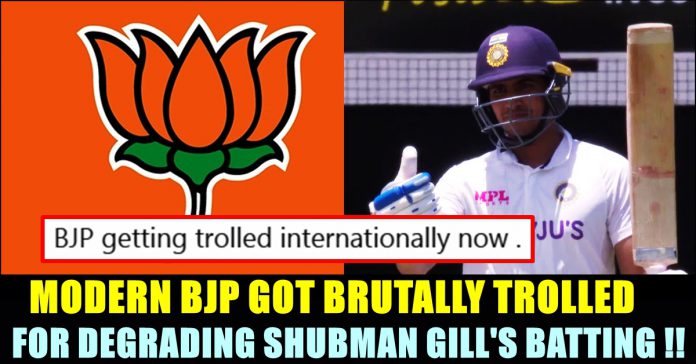 For making a baseless comment on Indian opener Shubman Gill’s batting skill, a twitter user named “Modern BJP” got trolled by New zealand all rounder Jimmy Neesham. He who plays for Kings 11 Punjab in Indian Premier League, appreciated the batting performance displayed by the 21 year old lad by writing “I don’t think Shubman will have a blank bat for long” in his tweet.

Shubman Gill who opened for India, scored a solid 91 runs from 148 balls with a bat that doesn’t contain any of the names of the sponsor. On seeing him batting exceptionally well with a sponsor less bat, Jimmy indicated that he will get a sponsor soon through his tweet.

A twitter handle named Modern BJP, replied to the tweet of Jimmy saying that it is easy to play Mitchell Starc. “It’s quite easy to play Starc. He is bowling so short. Any batsman will have enough time to see and hit boundaries.” he said through his tweet.

It’s quite easy to play Starc. He is bowling so short. Any batsman will have enough time to see and hit boundaries. #AUSvIND #INDvAUS #AUSvINDtest https://t.co/Hcm2SAt2lz

Jimmy immediately replied to the tweet asking the user to do it on his own if it is as easy as he says. “You go do it then” he said by adding an emoji.

This reply from the cricketer garnered huge reception from the twitter users of India. “Jimmy kindly ignore each nd every account having lotus as dp.. All these accounts are brainless, mindless and logicless” a follower alerted Jimmy whereas another one said “Anti- international Jimmy Neesham coming ……!”

Jimmy kindly ignore each nd every account having lotus as dp.. All these accounts are brainless, mindless and logicless

Ignore the handles you see have the word BJP written Jimmy, they are the absolute translation of morons!

India won the series against Australia by chasing 328 runs in the second innings. With the help of Pant, Pujara, Gill’s heroic batting knocks, team India managed to chase the mammoth total with three overs left in the day. The historical victory made fans extremely happy who are lauding Ajinkya Rahane for captaining the team effectively.

The demise of young talent Sushant Singh Rajput made a revolution in Indian film industry, we must say. High profile stars, producers and filmmakers...

Check How Fans Are Reacting After Knowing That The Girl Appeared In “Soorarai Pottru” Is A Real Pilot !!

Tamil cinema fans who watched the recently released "Soorarai Pottru" can't keep calm on knowing that the girl who appeared in the film towards...

Actor Vijay who is awaiting for the release of his "Master", has announced about his next project. Collaborating with Sun pictures after Sarkar, Vijay,...