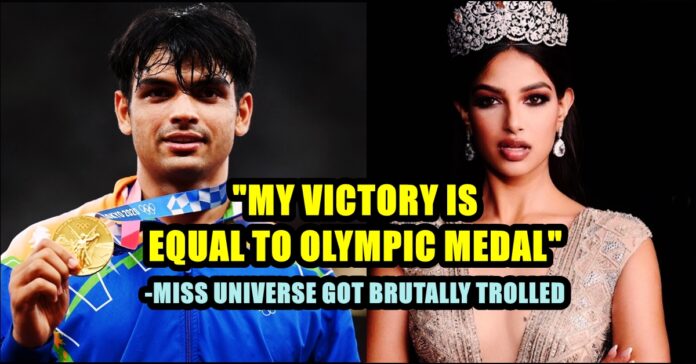 Harnaaz Sandhu who got crowned as Miss Universe recently, replied to trolls and criticisms that alleged that she won the competition due to her “pretty face” by comparing her victory with the success of Olympic participants. The 21 year old model who is slowly making her arrival into the film industry, disagreed with those who said that she won the Miss Universe 2021 competition due to her “pretty face” and said that there was lot of efforts that went into it.

Earlier this month, Harnaaz Sandhu was crowned as the miss universe and brought the crown back home after 21 long years. Last time, it was Lara Dutta who won the award and it was in the year 2000. While interacting with a media portal named Mid-day, Harnaaz said that there are lot of people who say that she won the title because of her pretty face.

“I know the amount of effort I went behind it. Instead of indulging in argument, I would rather work hard to make them realize my worth. This is the stereotype I want to break. This win is lot like an Olympic win. When we appreciate a sports person who represents the country, why can’t we appreciate beauty pageant winners ? However, mindsets are changing and I am happy to be breaking stereotypes already” she said to the media.

The Miss Universe also expressed her wish about entering film industry and breaking stereotypes in film industry as well. “I don’t want to be a normal actress. I want to be one of those very influential and who break stereotypes by choosing strong characters, being wise and by being inspirational” she said.

Sandhu has already appeared in a couple of films and also made her small screen debut. She has a number of projects in the pipeline as well. The aspiring actress expressed her wish about reprising Priyanka Chopra in her bio pic. “I would love to be part of that. I think she has inspired me throughout her journey and she will keep on inspiring millions of us” she said.

However, Sandhu’s comparison between Olympic winners and Beauty pageant winners didn’t go well with a number of online users. Check out their reactions below :

I think we are giving a little too much importance to that girl. It takes years of hard work, discipline to perform well in olympics. If you missed the chance then you have to wait for 4 years. Olympics is a greatest sport event. I am proud of Neeraj chopra.

No .. should compare it with Olympic gold medal .. How much efforts neeraj chopra would have done to get this

Doing “meow” on a world stage is not a joke. We must give her Bharatratna for her great efforts

Seems she will have great career in bollywood…speaking illogical is much needed trait for success there.😂

What a dumb logic lol, don’t even dare to compare pageant win with a an Olympic medal 😡 https://t.co/nPA3TEA4xZ