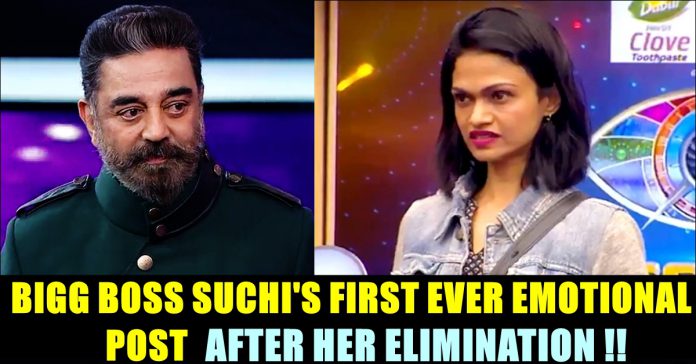 After getting evicted from the Bigg Boss house, Mirchi Suchi became active as ever in social media platforms. Within a day, Suchi posted 7 posts regarding her Bigg Boss stint and about other things in her official Instagram account through which she enjoys 1 lakh plus followers. While getting evicted, Suchithra said to Kamal Haasan that her father appeared in her dreams and told her to get out of the house as nothing about her were telecasted. She also expressed her fear of mass trolls and criticisms in social media. However, the radio jockey was well received by the netizens which are evident through the comments she is receiving for her posts.

Suchithra who entered the house as a wild card contestant, got eliminated due to the less number of votes she received from the audience. She who just had a short span of time to grab a spot in the hearts of the audience, failed to do it, it seems. Suchithra got nominated for the eviction with 9 votes from the housemates.

During her final conversation with Kamal Haasan before walking out of the show, Suchi said that Bigg Boss is her most favourite show and added that she entered the house as a fan girl. The radio jockey also said that she wanted to get her singing career back by participating in the show. After watching her compilation video, Suchi humorously said to Kamal Haasan that she looks ugly in the frame which could be one of the reason for the less number of votes she received.

Now, after coming out of the home, She uploaded a selfie of herself by saying that she wanted to remind herself of how she really look. Suchi also hinted that she started watching the episodes of herself by writing “now being manipulated through ‘kurumpadams’ in #biggbosstamil4”

“Had to remind myself of how I really look, in case I’ve even subconsciously believed any of the distorted image of me projected already, and now being manipulated through ‘kurumpadams’ in #biggbosstamil4 . 🎵Let me sing a #kuttistory – about a haunted house & a game of #smokeandmirrors 🎧” her caption for the post read.

In another post, Suchi summarised her entire experience inside the Big Boss house through a poem with a hashtag saying “Random poetry”.

“Broke in Jail 💔 Bye Bye #biggbosstamil” said Suchi in her next post by adding a picture of the emoji she had for herself inside the Bigg Boss house.

Check out the other posts she uploaded after coming out of the house :

Comment your views on these recent posts of Suchithra after getting out of Bigg Boss house !!

When the trailer of Akshay Kumar's "Bachchan Pandey" got released on YouTube, many online fans of Tamil cinema wondered about the fact that Tamil...