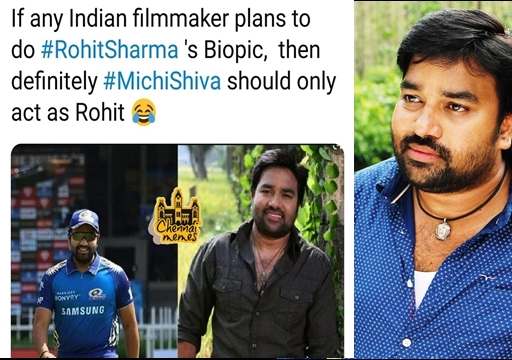 “Mirchi” Shiva who is fondly called as “Agila Ulaga Superstar” by his fans, finally reacted to the memes that surfaced comparing his looks with Indian cricketer Rohit Sharma. Tamil meme creators who think that they both look same, made many hilarious memes comparing the both so far. Shiva, in his very own humorous way, said that he never felt the similarities and went on to state that he can play cricket like Rohit Sharma but the latter can’t dance like him.

Check out some of the memes that surfaced comparing the Shiva and Rohit : On Field – On Screen
Same to same 😂😂😂 pic.twitter.com/b0XrD0ceYa

Mirchi Shiva’s “Idiot”, directed by Rambala is expected to release in theatres soon. To promote the film, the actor has been giving interviews to prominent YouTube channels and shared about his experience in acting in the film.

Shiva who debuted through “Chennai 28” as a protagonist, is very much loved by fans for his humour sense. Being the lead of the only spoof franchise of Tamil cinema, Shiva gained the tagline “Agila Ulaga Superstar” after trolling all the top tamil heroes through the film.

In the recent promotional interview of “Idiot”, Shiva opened on the memes that compares his looks with Indian captain Rohit Sharma. “I don’t have any kind of connection with those memes. He is such a hardworking cricketer and I’m just a local tennis ball cricketer” Shiva said.

“I don’t see any similarities between me and him. Better if we keep this matter secret without Rohit Sharma himself knowing about it. But one thing is, I can play cricket. But he can’t dance like me” the actor said in a sarcastic manner.

On the work front, Shiva is acting in films such as “Single Shankarum Smart phone Simran um”, ” Sumo”, “Kaasethaan Kadavulada”, “Saloon” and “Golmaal”. Last seen in the sequel of *Tamizh Padam”, Shiva’s “Party” with Venkat Prabhu is pending for a long time.

Previous article“I Was Not Drunk” – Yashika Answered To A Follower In Dejection
Next articleDoctor Committed Suicide After The Death Of Her Pregnant Patient!!

Director Vignesh Shivan who is expected to marry his long time girlfriend Nayanthara soon, has opened on how she reacted on seeing Samantha receiving...

On Tuesday, actor Arya appeared in front of cyber crime wing of the Chennai city police after the police officials summoned him based on...