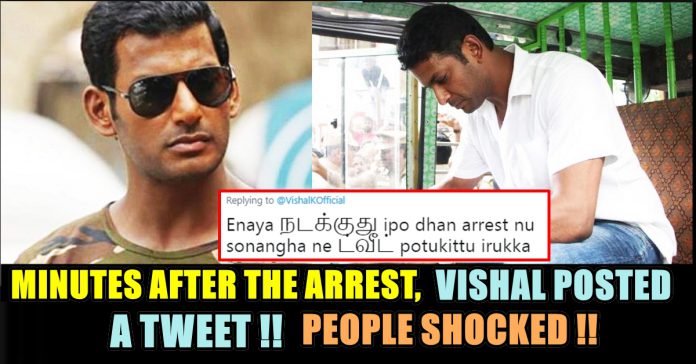 Actor-filmmaker Vishal on Thursday was detained by police in Chennai for trying to break into the Tamil Nadu Film Producers Council (TNFPC) office which was locked by one faction of the members, said police.

Vishal is the president of TNFPC. On Wednesday, some members of TNFPC, protesting against Vishal, locked up the office. On Thursday morning, Vishal and his supporters reached the Council’s office. The police, deployed to prevent any clash between the two factions, tried to persuade Vishal to leave.

Refusing to leave, Vishal argued with the police in a bid to try break open the lock. Police then detained him. The producers had claimed that after producer Gnanavel Raja resigned as the council’s secretary earlier this month, the body did not call for an Executive Committee meeting to nominate a replacement, but simply appointed producer Kathiresan to the post. They alleged that neither vice president – actor Prakash Raj and director Gautham Vasudev Menon – attend the council’s meetings, and that Vishal had organised events without getting the approval of the body’s general committee. The film producers also handed over the keys of the two offices to the Chennai Police.

For about an hour, Vishal was trying to put across his points to the police. However, the said they are acting upon the order posed by higher authorities.

Vishal asked the cops, “Are you supporting the unauthorised personnel who locked the office without informing us? What about the members who are supposed to go to the office? Who will be responsible for the loss of property?”

Speaking exclusively to India television ad, Vishal said “Unauthorised people came in and locked the office. I have respect for the police and I am here with them. I am willing to put forth the accounts and submit books. The general body meeting was called off because of Ilaiyaraaja’s concert. In March, we will have another general body council meeting.”

Now to our shock minutes after the news of his arrest arrived, a tweet from Vishal’s official twitter account has been surfaced. The tweet read as “Police who were mute yesterday wen unauthorised ppl locked the doors & gates of TFPC have arrested me & my colleague today for no fault of ours,absolutely unbelievable We will fight back,wil do everything to conduct Ilayaraja sir event & raise funds to help Producers in distress”

Police who were mute yesterday wen unauthorised ppl locked the doors & gates of TFPC have arrested me & my colleague today for no fault of ours,absolutely unbelievable

We will fight back,wil do everything to conduct Ilayaraja sir event & raise funds to help Producers in distress

Many shocked on seeing the tweet of Vishal as news surfaced that he is arrested. Check out the mixed reactions from them here :

Vishal bro is out now?Or it might be an admin

You are a real hero . You need to teach lessons for this tamilnadu govenment . They scared of you . Avanugala. Nasuki podanum .

Targeting me for a simple reason that I want to do good for producers who have lost everything,well I wil continue to do this no matter what. My conscience is Clear,God & Truth is on my side & I will continue to march ahead

NO ONE CAN STOP ME FROM CONDUCTING ILLAYARAJA SIR EVENT

Previous articleThis Message From Sivakarthikeyan To Vijaysethupathi For His 25th Film Winning Hearts !! Check Out !!
Next articleAnupama Parameshwaran Wants Her Boyfriend Like This !! Reactions Are Just ROFL !!