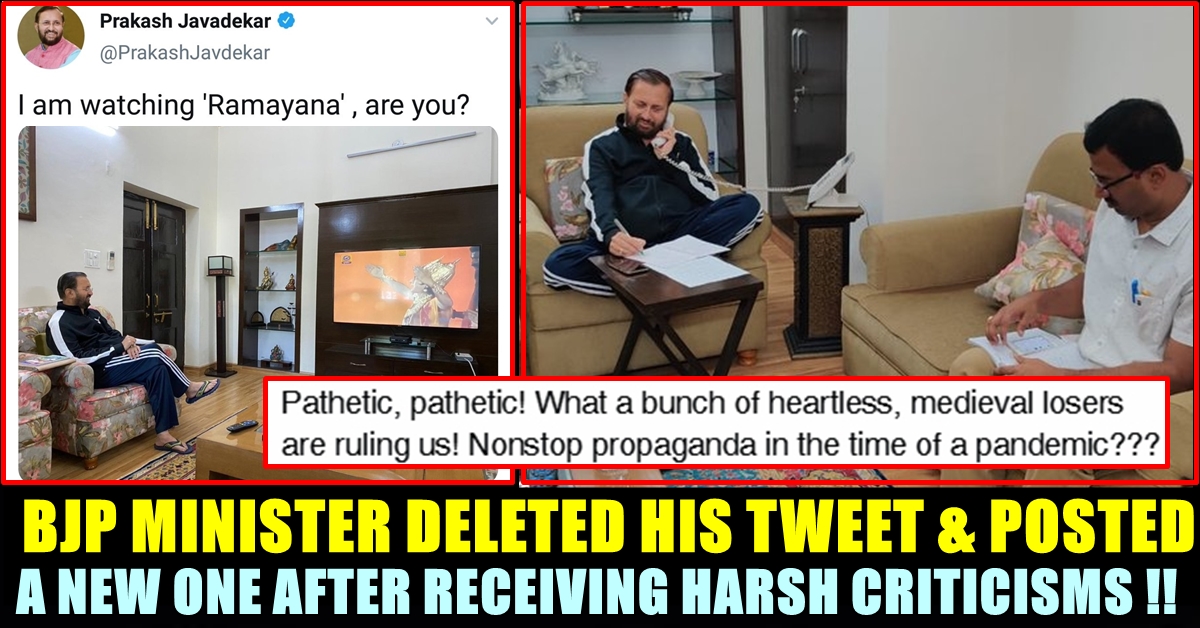 Member of the Bharatiya Janata Party and Minister of Environment, Forest and Climate Change and Minister of Information and Broadcasting, Prakash Javadekar, deleted his tweet of watching “Ramayana” which got telecasted in Doordarshan. People slammed him for not taking actions regarding the migrant workers who are forced to walk to their respective places due to the ongoing 21 day lockdown.

The workers, without having no other options, set out on foot in the wee hours of the morning for villages hundreds of miles away, walking along the road they helped build and past apartment towers they helped raise. Chandra Mohan, a 24 year old plumber, left at 3 a.m in the morning. Having one bag on his back and another slung across his chest, Chandra Mohan walked 28 miles and still had 600 miles to go to reach his home in the state of Bihar.

Mohan is one of the thousands who are suffering of hunger. Most of them are unsure of their route or where they would sleep or how they would eat. There are no planes, no trains, no interstate buses and no taxis as well. At this time, the tweet of Minister Prakash Javadekar which had him watching “Ramayana” in TV instigated severe criticism against him. The now deleted tweet’s screenshot is being shared widely by the users of social media.

Check out his tweet’s screenshot below :

As soon as the tweet surfaced, users of Twitter started reacting in a most furios way which resulted in the Minister deleting his tweet. “I am watching you sitting comfortably at home while many migrant workers are struggling without food and water travelling miles walking towards their villages.” wrote Farah Khan a popular designer.

Here’s some of the reactions his deleted tweet received :

I am watching you sitting comfortably at home while many migrant workers are struggling without food and water travelling miles walking towards their villages. https://t.co/FL67BWTBk8

Another twitter user morphed a video of a migrant worker’s son crying to media while walking towards his home and mocked the minister.

Laud the efforts of #PrakashJavadekar , BJP Minister of Environment, Forest and Climate Change and Minister of Information and Broadcasting continuesly monitoring helpless migrant labour’s returning to their villages in UP and BIhar from Delhi pic.twitter.com/8RKnlWl0GV

Pathetic, pathetic! What a bunch of heartless, medieval losers are ruling us! Nonstop propaganda in the time of a pandemic??? @PrakashJavdekar @nsitharaman @PMOIndia @imVkohli @fc_msdhoni pic.twitter.com/KuHr5uNhqt

As an effect of these criticisms, Prakash posted a new tweet which shows him working from home. “Home has become office ! Connecting and coordinating with Officers of my Ministries for facilitation during the lockdown!” his new post’s caption read.

Home has become office ! Connecting and coordinating with Officers of my Ministries for facilitation during the lockdown!#StayHomeStaySafe#IndiaFightsCorona #WashYourHands pic.twitter.com/NHM4bInUr5