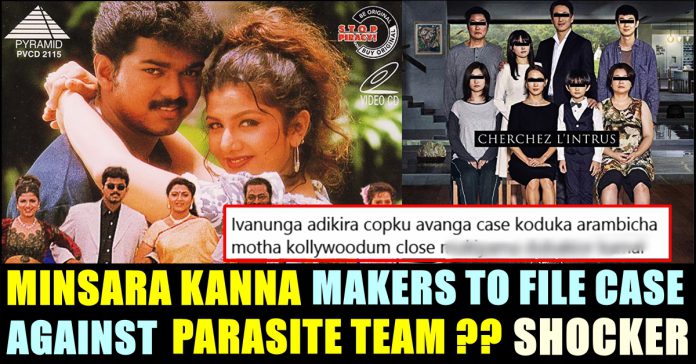 K.S Ravikumar, the director 1999 film Minsara Kanna has expressed his happiness on “Parasite” winning the Oscar in 4 categories. The filmmaker who said that he hasn’t watched the movie yet, said that he feels extremely proud for thinking of a story similar to “Parasite” 20 years ago. “I haven’t seen parasite but going by what people are saying, I think I should feel happy that I selected an Oscar-worthy script 20 years ago. Not just me, even Vijay loved the story of the film very much and we had a great time filming it. I want to congratulate the team of “Parasite” for winning 4 Oscars” said the director.

Now a recent report of Dinamalar suggests that he was also asked about suing the makers of “Parasite” regarding the plagiarism. To that the filmmaker has reportedly said that the rights of the film belongs to producer Thenappan. “He is the one who has the rights to take legal actions” said K. S Ravikumar according to Dinamal.

“As far as it is a case against the people of foreign countries, we have to employ a foreign lawyer. I will let you know about the details soon” said Thenappan as per the report of the daily. On seeing this news, popular film analyst of India Baradwaj Rangan, reacted to it by raising a question through his official twitter account.

The producer of MINSARA KANNA is planning to sue… Bong Joon-ho? 🤔https://t.co/bJiDaB2GeO

The victory of “Parasite” at the 92nd Academy award ceremony is one of the biggest moment in the history of cinema. The movie which revolves around a four members family trying to own a luxurious house talked about the poverty in the South Korean region. Infact, the idea of the film is universal which can be connected by any one in the world.

The main themes of Parasite are class conflict and social inequality. Film critics and Bong Joon-ho himself have considered the film as a reflection of modern capitalism. The similarity between “Minsara Kanna” directed by K.S Ravikumar and “Parasite” is the members of the poor family getting employed to a rich family without introducing themselves as a family. The Tamil film which was released in the year 1999 became a box office dud during its release time.

Check out some of the reactions for the recent news :

Would be fun if Korea starts suing Indian film industry over ‘inspired’ songs & films over the years…that awful hindi remake of oldboy should be a crime!

Sir, Indian movies have been borrowing a lot of things from Korean Cinema. What would happen if they retaliate?

What do you think on these reactions and news on Minsara Kanna crew suing “Parasite” ?? Comment your views below !!

Actor Nataraj Got Trolled For His Tweet About Joining Army !!