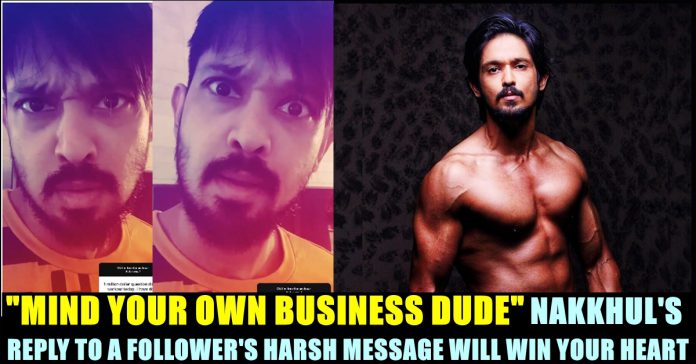 “Mind Your Own Business” – Follower Mocked Nakkhul’s Initiative !! Here’s How He Replied

Actor Nakkhul Jaidev who is pretty much interactive with his Instagram followers nowadays, reacted to a follower’s harsh message on his “Did you ?” initiative. The actor decided to reply back to him by sharing a message sent to him by a married woman who said that his initiative helped her a lot in her life. Nakkhul is enjoying half a million followers in Instagram and has been providing them fitness tips and work out methods to them through his stories.

Nakkhul who debuted through Shankar’s “Boys”, made his debut as hero through “Kadhalil Vizhunthen”. The song “Adra Adra Naaka Mukka” which took place in the film gained him the fame among the fans of Tamil cinema. He went on to act in a number of films including “Maasilamani”, “Naan Raajavagha Poguren”, “Vallinam”, “Tamizhukku enn ondrai Azhuthavum” etc. He also worked as a playback singer in films, notably recording for Harris Jayaraj in his albums for Anniyan, Ghajini and Vettaiyaadu Vilaiyaadu.

The actor got married to his long time girl friend Sruthi Baskar in the year 2016. His wife and him are known for making videos together on their Instagram handles which is receiving positive response from the followers of their handles. On 2nd August 2020, Sruthi gave birth to their first child a baby girl and named her Akira and pet named her Khulbee. The actor who loves to interact with his followers, could be seen giving them fitness advices often through his Instagram handle.

For past recent days, Nakkhul developed this habit of asking his followers “Did you?” to remind them about working out on that day. With his very own cute comical expressions, the actor, after a long pause, would ask them “Did you ?” and would update on his work out for that day. “Did you ?? Shouldn’t you ?’ is what he would always use to motivate his followers.

Watch one of such videos below :

On seeing these videos of him, a followers of him spewed hatred at him saying “Mind your own business due did you shouldn’t you chai”

Reacting to this message, Nakkhul said, “Next story is one of the million reasons why I do it”. In his next story, the actor uploaded a message sent to him by a married woman who consistently worked out and lost weight. She said that it helped her to get pregnant and thanked Nakkhul for motivating her through his daily stories.

“Greetings, Nakkhul! I got married in Nov 2019 and been trying to get pregnant ever since. We went to the doctor end of last year and I was advised to lose some weight. Been working out and jogging since then and l’m 4 weeks pregnant now. Thank you for the daily reminder, Nakkhul! In a way you have inspired me!” message of the mother read. Sharing the story, Nakkhul congratulated the couple and confirmed that he is going to continue doing “Did you?”

Check out the screen shot of the story below :

A never before seen video of Tamil nadu based Pan Indian actress Samantha rehearsing for the sensational "Oo Soliriya Mama" song got surfaced in...