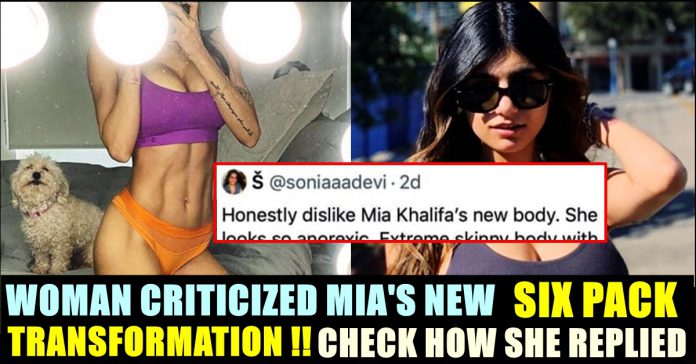 In the middle of quarantine, Mia Khalifa found some time to roast those who are trying to body shame her. The 27 year old who worked in pornagraphic industry for a long time, left it after finding herself in a controversy for performing sexual acts wearing the Islamic hijab in a video. After leaving the career, Mia transformed into a social media personality and webcam model. She is also doing sports commentary.

Being an active user of social media platforms, Mia enjoys a huge fan following, especially on the micro-blogging site Twitter and photo-sharing site Instagram, where she keeps on posting new pics and status to keep her followers engaged. She is often in limelight for her naughty tweets and it won’t be wrong to say that she’s a favourite of Twitter users who never fail to give enough attention to all her tweets.

5 day unwashed hair, recycled scenery cause I only have 3 mirrors, and Lycra is the brand ✋🏼

Now, she grabbed wide attention from her followers for a reply she made to one of her follower who said that she hates Mia’s body shape. In a way of criticizing her new body transformation through which Mia built a six packs, the twitter user wrote “Honestly dislike Mia Khalifa’s new body. She looks so anorexic. Extreme skinny body with super big Boobs” in her tweet.

Mia Khalifa saw this tweet and decided to give back to the user it seems. “Bitch I don’t like your body either” read the reply of Mia Khalifa to the twitter user.

As the user deleted the tweet after Mia’s reply, she captured the screenshot and posted it in her Instagram story with a caption saying “JK , I would never take the highroad”

As said this tweet from Mia garnered wide attention as many people started reacting to it in various ways. Check out some of their reactions below :

So rude && uncalled for. Mia, keep being you! That’s why we love you ✨

U and ur body are perfect 😘inside and out gurl!

But being honest… She doesn't look anything out of the ordinary. Why's she Commenting?… She may say u look anorexic but she can never hope to achieve six packs or the breast size.

Bet that being horribly unhealthy and extremely overweight is beautiful? Gtfo

What do you think on this reply made by Mia to Sonia ?? Comment your views below !!

Previous articleActor Nandaa Shared An Incident About Ajith Kumar That Took Place During Late 90s !! WATCH
Next articleWhile Everyone Wishing Ajith For His Birthday, This Actor Wished Vijay ??

Despite of the several confirmations from the makers of "Master" movie on the film's release plans, fans again came up with speculations asking if...

Tollywood Star, Pawan Kalyan is all in praise for Tamil Nadu Chief Minister M. K. Stalin. He has posted a tweet on his Twitter...