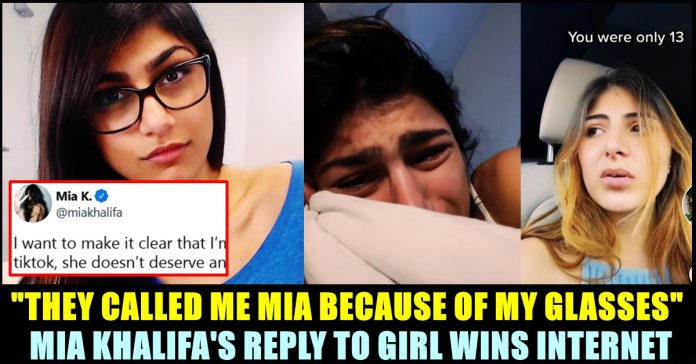 Mia Khalifa, former po*nographic star and popular media personality, responded to a girl who shared her story about being subjected to severe harassment from boys for wearing glasses like her. Mia who responded to the Tik Tok video by making a duet with her, expressing her emotion, penned an emotional note saying that she is heartbroken over thousands of young girls who are suffering just because they are looking like her.

Most recently, a trend is being followed in the Tik Tok platform where teens could be seen sharing a story of themselves about getting sexualized at a young age or being forced to grow up sooner while the song “Cigarette Day dreams, you were only 17” playing in the background. Following the trend, a Tik Tok user named “Oreo_mlkshake” shared a story of herself being harassed by boys for wearing eye glasses.

“I can’t wear my glasses because the high school boys keep saying I look like Mia Khalifa with them, and it makes me uncomfortable” said the Tik Tok user which went insanely viral across the globe. The tik tok video garnered 8.5 million views and it is notable that Oreo_mlkshake shared that she was just 13 when she faced such harassment from boys.

The video grabbed the attention of Mia Khalifa herself and the former po*n actress uploaded a duet with her video, crying at the narration of “Orea_mlkshake”. “I am so sorry, I don’t wear them anymore for this reason” Mia;s caption for the Tik Tok video read.

Watch the Tik Tok video below :

Mia, in her twitter space, said that she is not offended with the Tik Tok made by the girl and felt that she deserves no negativity. “I want to make it clear that I’m not offended by this girl’s tiktok, she doesn’t deserve any negativity. Im simply heartbroken over the thousands of young girls who’s innocence has been stolen by being objectified and sexualized by men because they look like me. Im sorry.” Mia’s tweet read.

I want to make it clear that I’m not offended by this girl’s tiktok, she doesn’t deserve any negativity. Im simply heartbroken over the thousands of young girls who’s innocence has been stolen by being objectified and sexualized by men because they look like me. Im sorry. https://t.co/BzFn9skuQo

Many supported Mia saying that there is no fault on her and blamed the boys who harassed the 13 year old girl and sexualized her at such young age. Check out some of the reactions for this gesture of Mia below :

In Pakistan our society is same
They told nd make meme on Our singer Said that she looks like Mia K then she didn't wear it again.
She's Momina Mustehsan pic.twitter.com/s2Ht3ub1nD

It’s not your fault Mia!, It's the fault of those who sexualize people any chance they get, even if that means young girls because they can't understand that there is a person with feelings and opinions behind what they are sexualizing. I love you so much girl 🤍

It's not your fault. Never yours. Blame those who sexualize people at any chance they get. You hear me, never yours or other women's fault; blame the one who sexualizes. Also, people who sexualize anyone can go pluck their eyes out like what the Matthew 18:9 said.

Mia you don't have to apologize for anything at all for how you look. Whatever happened wasn't your fault, it was the people around you who misused your innocence. I wish I was at TVA so I could put you in a better place but sorry 😭 Still a baddie Mia, love you queen ☺❤✨

You don't have to feel sorry for anyone people who have sadistic nature of bullying should end. Every one deserves respect even if your past haunts you for whatever reasons it is human tendencies to label a person. You give hope to many fans who love you ..🌹🌹🌹💐💐💐 stay cool

People often call me "Mia" because I wear glasses and have big boobs. But it's an honor because I've been following you for three years and I think you're an amazing and fun person!!

However, few criticized Mia for her Twitter bio in which she wrote “Are you even a brown girl with glasses if you haven’t been called “Mia Khalifa”?” to boast her popularity across the globe.

“They Mocked, They Criticized & They Suppressed” – Sanam’s Tweet About Actor Vijay Goes Viral !!

On Thursday, Sanam shetty conducted a question and answer session with her fans and followers in Twitter and answered to many of their questions...