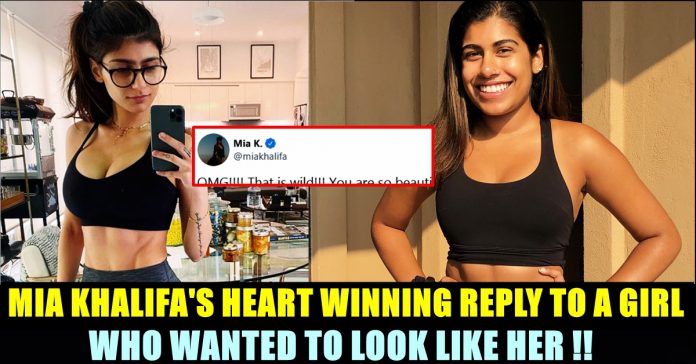 Mia Khalifa’s Heart Winning Reply To A Girl Who Wished For A Physique Similar To Her !!

Mia Khalifa is pretty much interactive with her followers in social media platforms where she enjoys nearly three crore followers. Most recently, a reply she provided to a female twitter user won hearts of the online users as she appreciated a her for her smile and skin after getting complimented from her for the abs she has built through months of hard work.

One of the most significant body transformations of recent times is Mia Khalifa’s who is inspiring millions of her followers with her massive changeover. Mia is currently boasting her six packs through her Instagram posts and most of her 3 crore followers of the popular icon are following the footsteps of the 27 year old to look like her.

Check out some of her recent posts here :

On Saturday morning, a girl named as Mon uploaded a post saying that she has always been compared with the looks of Mia Khalifa. Sharing a post which said “Show me the celebrities you’ve been told you look like”, Mon uploaded a couple of pictures of herself and Mia Khalifa.

While uploading the post, Mon tagged Mia Khalifa and complimented her physique by writing “please can I have your abs queen”

Her bio says it all. But please can I have your abs queen @miakhalifa https://t.co/oE6gwGZjCR pic.twitter.com/7ems986bPk

Replying to this tweet of Mon, Mia said that she looks so beautiful and complimented her back for her skin and smile and even said that she is ready to trade her abs with Mon’s smile and skin. “OMG!!!! That is wild!!! You are so beautiful, is that narcissistic to say?! sis, I’ll trade you the abs for your skin & smile” read Mia’s reply.

This reply of the global icon won hearts of her followers who lauded her for being nice to her admirer. “OMG SCREAMING. You just made me week thank you you’re amazing” Mon expressed her excitement.

OMG SCREAMING. You just made me week 😭😭 thank you you’re amazing ❤️🥰❤️

Being an active user of social media platforms, Mia enjoys a huge fan following, especially on the micro-blogging site Twitter and in photo-sharing site Instagram, where she keeps on posting new pics and status to keep her followers engaged. She is often in limelight for her naughty tweets and it won’t be wrong to say that she’s a favourite of Twitter users who never fail to give enough attention to all her tweets.