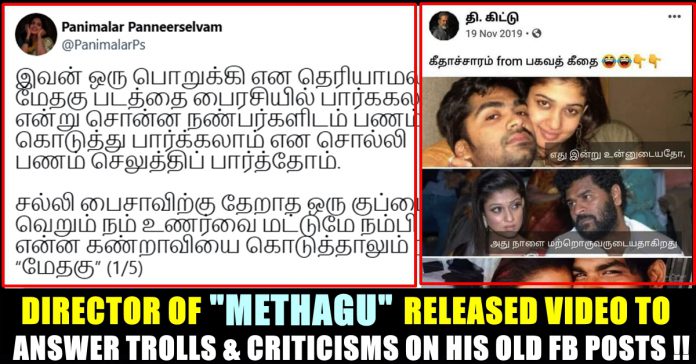 Director of the recently released “Methagu” film released a video in his official social media handles, clarifying about his controversial old face book posts which are doing rounds in social media platforms, since the release of his film. He expressed his regret over the posts which were written as a counter opinions to the political happenings of that time and requested people to support his film now. “Some people are spreading those 2019 posts now to restrict the reach of my film to the larger audience” said the filmmaker through the video.

The most anticipated “Methagu” film which portrays the life of the founder and leader of Liberation Tigers of Tamil Eelam, Velupillai Prabhakaran, released recently and is receiving rave reviews from the critics and audience. Directed by T.Kittu, the title “Methagu” means “His Excellency”. Velupillai Prabhakaran fought for over 25 years for an independent state of Tamils in the northern and eastern parts of Sri Lanka. Many celebrities have been stretching their supportive hands to the film which released in an online streaming platform. The film which was reportedly made of a very low budget and is being lauded for portraying the life of the leader in a right way.

Kutti Mani, Anandan, Eeshwar Baasha, and Vijay in major roles are some are main casts in the film. The film’s teaser released in October 2020 while its trailer was out in January 2021 and has created noise among the fans and supporters. The music for the film is composed by Praveen. The political thriller marks the early years of Velupillai Prabhakaran and his vision. It also embarks upon life story and events in the life of Prabhakaran’s life.

Now, as soon as the film started gaining attention among the mainstream audience, the controversial facebook posts of its director T. Kittu are trending in the social media platforms. The posts shows the filmmaker taking a dig at the personal life of actress Nayanthara who is fondly called as “Lady Superstar” by the audience. He also made comments on some prominent political leaders.

Many posts criticizing the filmmaker are flooding the timeline of the micro blogging social media platform. Check out some of the posts below :

Now, reacting to these posts, T. Kittu released a video saying “I thank Tamil people from across the world for their support for our “Methagu” film. I am answering to the criticism that are being made against me for the past two days. During 2019, I had uploaded posts in my Facebook account, counter attacking the statements of political leaders. It included jokes and trolls. Now, they are spreading the posts to restrict the reach of our film Methagu” Kittu said in the video.

“Several groups are working on stopping the film’s release. People from all the political parties supported the release of the film. I register my regret if my posts that were uploaded on 2019 hurt leaders. Please don’t continue spreading the posts and I want all your support for “Methagu” film” the filmmaker further added.

Nirmala Sitharaman  is an Indian politician currently serving as the Defence Minister of India. She is also a member of the Rajya Sabha for Karnataka. Sitharaman...