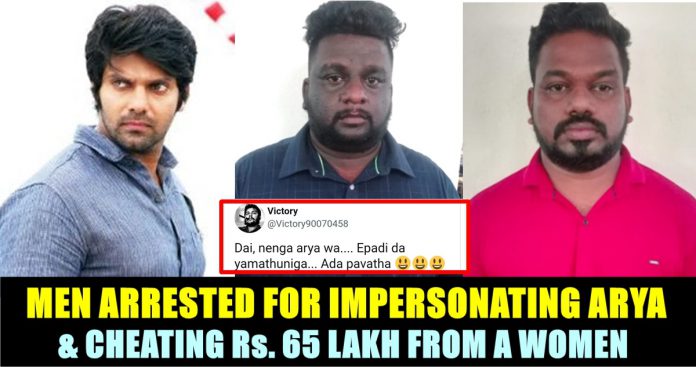 Starting his career in the Tamil Cinema industry, Arya has acted in more than 50 movies. He is best known for the following movies Sarpatta Parambarai, Teddy, Raja Rani, Irandaam Ulamgham, Boss Engira Baskaran, and so on.

Actor Arya hosted a matchmaking reality television show named, ‘Enga Veetu Mapillai’ in the Tamil language airing on Colors Tamil from 20 February 2018 to 17 April 2018. After this show, Arya had faced much controversial news.  The objective of the show, Enga Veetu Mapillai is to find a suitable bride for Arya among the 16 participants. Some claims it was a scripted show but the truth is still hidden.

Actors Arya and Sayyeshaa got married in Hyderabad on March 10. Sayyeshaa Saigal is an Indian actress who primarily appears in Tamil-language films It is said that Arya and Sayyeshaa fell in love during the shooting for their movie Ghajinikanth. The couple is recently blessed with a girl baby.

A case was filed against Arya for cheating Rs. 65 lakh from Vidja, a Srilankan woman settled in Germany. On account of the case, Arya was asked to report at the cybercrime wing of Chennai. Arya reported that he does not even the girl and this may be a fake statement.

After the inquiry with the Kollywood actor Arya, the Chennai police of cybercrime made the further investigation of checking the Internet Protocol (IP)  address using for chatting and cash inflow by the Srilankan woman. The cybercrime wing police led by inspector of police Geetha.

Mohammad Arman and Mohammad Hussaini of Pulianthope in Chennai are the two suspects who personated actor Arya. Both the suspects are arrested by the cybercrime police of Chennai yesterday (24th August 2021).

This news was posted on Twitter by News7 Tamil. Many funny, as well as controversial comments, are poring on various social media platforms. Following below are a few of the comments under the Twitter post.

Sindujj commented, “It’s clear cut drama to save Arya lol, this is India.”

It is reported that the case will be further investigated. And the arrested suspected will be inquired about the amount cheated from the Srilankan woman.