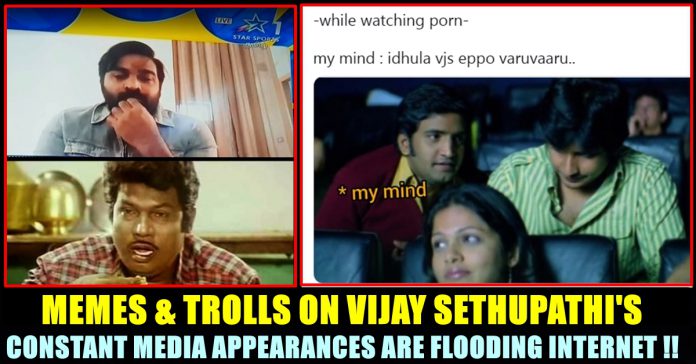 There is no actor with “zero haters” in the Internet era. Actor Vijay Sethupathi who was considered as one of the very few Tamil actors with no haters, is being subjected to severe online trolls for the past one week due to his frequent film releases and constant appearances in media platforms to promote them. In September month alone, the actor saw three releases so far and few of his other films are expected to hit the screens in near future as well.

Apart from that, making videos of his films, video clippings of his promotional you tube interviews, clips of himself hosting the Sun TV’s cookery show “Master Chef” exhausted the Internet audience which led them to troll him with memes and trolls. Last night, to promote “Anabelle Sethupathi” which is currently streaming on Hotstar, he have appeared in Star Cricket Tamil during the IPL streaming.

Irrespective of the character and his image, Vijay Sethupathi has been acting in many films. He did a cameo in “Oh My Kadavule” as a “God” and has accepted to do special appearances in films like “Pisasu 2”, “Michael”, “Viduthalai”, “Mumbaikaar” etc. He acted as a villain for Madhavan in “Vikram Vedha”, for Rajinikanth in “Petta”, for Vijay in “Master”. The actor is also roped in to act as villain for Kamal Haasan in “Vikram” which is being made under Rajkamal films International. It is also notable that Vijay is currently concentrating in other languages such as Telugu, Hindi etc.

Dye to his recent releases “Tughlaq Darbar”, “Anabelle Sethupathi” and “Laabam”, the actor had to give interviews to various channels. With Netflix buying “Tughlaq” and Sun TV streaming it as Vinayagar Chathurthi special film, the actor gave special interviews for both the spaces. He appeared in almost all the prominent youtube channels and opened his heart out in all of them. Promos of himself hosting “Master Chef” is being telecasted in Sun TV every now and then. Making video of his “Kaathu Vaakula Rendu Kaadhal” also got leaked by some miscreants.

Initially, posts celebrating Vijay for his mature understanding about Politics, Cinema, Future and Society were surfacing in Internet platforms. Online fans who has been watching all his interviews, after a point, got fed up and started trolling him mercilessly. Memes are flooding with posts being written trolling the actor in social media platforms. A Twitter user went on to question why Vijay Sethupathi is included in the playing 11 of team Chennai Super Kings.

Check out some of the trolls below :

Why is Vijay Sethupathi not in the CSK's 11?

Vijay sethupathi has been cast in Marvel studios' Doctor strange in the multiverse of madness as an unknown character.