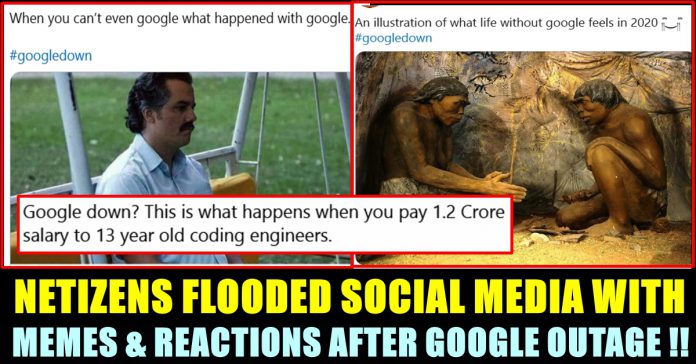 Memes & Reactions Are Pouring On The Global Outage Of Google Service !!

Google contacts, Docs, Drive, Gmail, Youtube and more apps of google have gone down. On the evening of Monday, the service of Google went down abruptly and affected thousands of users across the globe. The outage started at 5 PM on 14th of December and seemed more intensive than the last one. 40,000 outage cases from around the world were reported on Downdetector and the website that tracks web outages 10 minutes after the outage began.

Youtube and Gmail seem to have been worst hit globally, causing various kind of reactions on Twitter on how Google left them high and dry especially on the first day of the week. Minutes after the outage took place, Google updated that its services are back online.

The latest update of Google had said “The problem with Gmail should be resolved for the vast majority of affected users. We will continue to work towards restoring service for the remaining affected users, but no further updates will be provided on the Google Workspace Status Dashboard. Please rest assured that system reliability is a top priority at Google, and we are making continuous improvements to make our systems better.”

However, memes and reactions trolling the situation started pouring from all the directions of Internet. Most of the users blamed year 2020 for the outage that took place. “The day came when you can’t even @Google what happened with @Google ! It’s #2020 and nothing is normal this year.” a user wrote whereas another one said “Google down? This is what happens when you pay 1.2 Crore salary to 13 year old coding engineers.”

The day came when you can’t even @Google what happened with @Google !
It’s #2020 and nothing is normal this year.#googledown pic.twitter.com/bxgSUFXOtY

Google down? This is what happens when you pay 1.2 Crore salary to 13 year old coding engineers.

Oh man we really are too dependent on Google I guess🤷🏻‍♀️

When you can’t even google what happened with google. #googledown pic.twitter.com/CpMd1KiBJr

Yahoo search when they see more than 0 users on their site #googledown pic.twitter.com/olG2X5ZnPM

Now, when many #Google services are down

#googledown Google services like Search, Gmail and YouTube are down but Google Ads are working perfectly! Now you know their priorities 🙂
Reminds me the saying – if you are not paying for the product, you're the product!

My Gpay app which hasn't been working for decades. #googleoutage pic.twitter.com/jsXDQIXjsA

When YouTube and other Google services are down so I can’t do anything while stuck at home #YouTubeDOWN pic.twitter.com/U8GbGih2hc

An illustration of what life without google feels in 2020 ༎ຶ‿༎ຶ#googledown pic.twitter.com/0A9LKlJyr7

Everyone coming on twitter to see if it's just me or the entire world facing the problem with gmail and gmeet.#googledown pic.twitter.com/8iIQowQadd