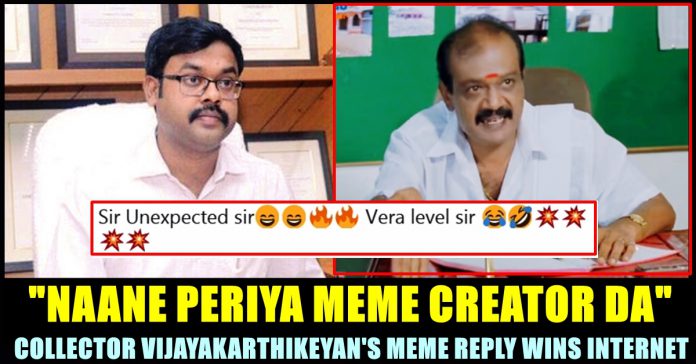 Dr. K. Vijayakarthikeyan who is currently serving as the secretary of Tamil Nadu State Human Rights Commission, made Bakrid wishes to his followers and others through his official twitter handle by adding a meme template of comedy actor Senthi from “Boys” movie. On seeing his one of a kind wishes from him to the believers of Muslim community, a twitter user replied to his tweet saying that he feels proud to have a district collector who creates memes. Replying to him, Vijayakarthikeyan said added another meme template from Rajinikanth’s “Baashha” movie which tickled the laughing bones of his followers.

Bakrid or Eid-Al-Adha, one of the most important festivals celebrated by Muslims all over the world, falls on the 21st of July this year. To celebrate the most auspicious festival of Islam, people and believers of the community would wish each other, conduct communal Eid prayers and cook celebratory meals. In the second most important festival of Muslims, believers would sacrifice goat, sheep, camel, buffalo in whatever number an individual can afford.

Along with public, many influential personalities including celebrities from cinema industry, politicians and sports athletes has been wishing the people from Muslim community on the auspicious day. Dr. Vijaya karthikeyan IAS who is served as the collector of Tiruppur district and currently serving as the secretary of Tamil Nadu State Human Rights Commission, uploaded his wishes with a meme.

He posted the picture of comedy actor Senthil from “Boys” movie in which played the role of “Annaveri Kannaiyan”, as he could be seen surviving through free foods that are provided in religious places in the film. “Bakrid wishes friends ! Bakrid2021 Meanwhile me to my friends” he wrote in his tweet by adding laughing emojis. Check out his tweet below :

#Bakrid wishes friends ! #Bakrid2021
Meanwhile me to my friends 😂😂😂 pic.twitter.com/CddjVaFYnK

When our district collector is a meme creator… Feeling proud sir 😄😁♥

Replying to this comment, Dr. Viijayakarthikeyan uploaded a GIF from “Baassha” movie. The character would say “Naane periya rowdy da, athukapram thaan ithellam” in the film and the collector denoted that he is a meme creator first before becoming collector and secretary of Tamil Nadu State Human Rights Commission.