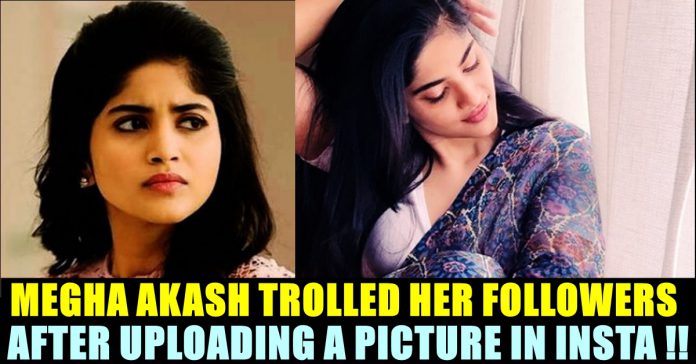 Actress Megha Akash who debuted in Tamil film industry through Rajinikanth’s “Petta”, rose to fame after pairing with Simbu in “Vanthaa Rajavathaan varuven” and with Dhanush in “Enai Nokki Paayum Thotta”. The actress enjoying a separate fan following in social media platforms and is pretty much interactive with them. She is currently enjoying 27 lakh followers in the photo posting social media platform. Now, she grabbed the attention of her followers by trolling them through the caption for one of her recent posts.

Within a short span of time, Megha impressed vast number of fans which is evident through the fan accounts that were emerged in the social media platforms. So far, the 26 year old has posted 183 pictures and videos in her Instagram account.

As said, the actress who is pretty much interactive with her followers, never turned her comments off for her posts in Instagram and replied to them whenever it is needed. Now, for the most recent picture she uploaded in Instagram, Megha has turned the comments off and reason behind her decision was hinted by herself through the caption.

In the black while selfie which was posted on thursday, the actress could be seen having a sun glass hanging on her T -shirt. The sun glass shows a person sitting opposite to the “Kutty story” actress. Turning off the comments of her post, Megha said “I can see my friend in my shades too so chill out” by adding a laughing emoji.

The actress predicted the comments that are going to surface on her post regarding the person sitting opposite to her and premeditatedly turned the comments off to avoid making an unnecessary buzz do rounds in media portals and among her fans, followers.

Months ago, the actress replied to a follower who commented on her clothes. On seeing a picture of her, a follower questioned about her clothes by commenting “Kovil la ipdi la dress podlam ah” to which the actress simply replied writing “It’s not a temple”