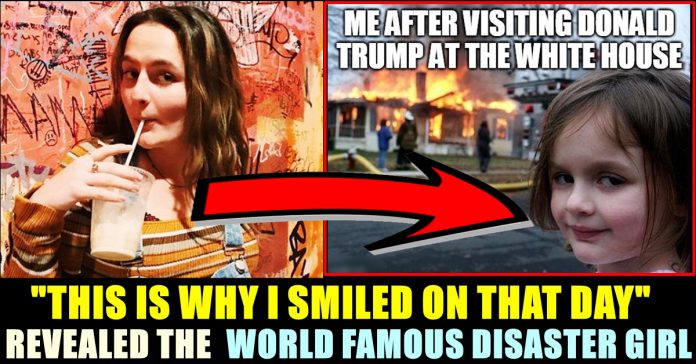 We all must have came across at least one meme consisting the cute little adorable girl with an evil expression in her face. The image which was captured in the year 2005 and the girl who is being fondly called as the “Disaster girl” was just 5 years old when the picture was happened. Now, a video of herself admitting what really happened behind the making of the picture got surfaced in the internet and is going viral under the title “I accidentally became a meme”.

Named as Zoe Roth, the “Disaster girl” is from Lake Tahoe on the US east coast and is 20 years old as of now. In the video, she introduces herself as “Disaster Girl” and says “I accidentally became a meme and this is that story”. In the 4 minute 11 seconds long video, Zoe starts narrating how it all started way back in 2005.

“I was five year old, me, my brother Tristan and my parents were watching Tv and it was a normal day. ” Zoe starts telling us the story. When they heard the noise of fire sirens, they went outside and saw billowing smoke up just two blocks away. The family decided to go there and check what’s happening. Zoe’s father who bought a new camera led his children to the scene and they saw a house on fire.

“At that time, we thought it was a real fire but all the fire marshals weren’t really in a rush to put it out. They are kind of just walking around. They are letting like kids put out the fire. The house that was one fire was donated to the fire department by the owners for a test burn because they wanted to clear the land.”

“I didn’t know it was a test fire, that nobody was hurt, so at the time I remember looking inside and trying to figure out what was going on. My dad was taking pictures of the house and everything going on and then he said it was my turn to smile. When he said “Okay, smile” I made that face. So that’s why I made that face, just because it was my smile at that time” said Zoe.

Zoe went on to explain how her picture became famous and occupied a separate space in social media platforms. She said that her father sent the picture to a magazine named as JPEG for a competition they conducted called “Emotion capture”. Zoe reveals that her father won the competition by sending her picture to it. She who was studying 2nd grade at that time, showed the magazine to her classmates and teachers saying that she became famous.

“I never had a fear of anybody conflating me with being evil or causing these disasters. None of my classmates and no one that I know or I’m close with have ever thought that. But I feel like random people have always think that I’m evil” Zoe says. “But I never taken it too seriously or worried about it.” she says.

However, she confessed that some horrible memes makes her uncomfortable. “But I know that I can’t do anything about it” Zoe adds. At the end of the video when she was asked whether she started the fire, Zoe, with a evil look says “Yeah” only to end the video with “I’m just kidding, just kidding”.