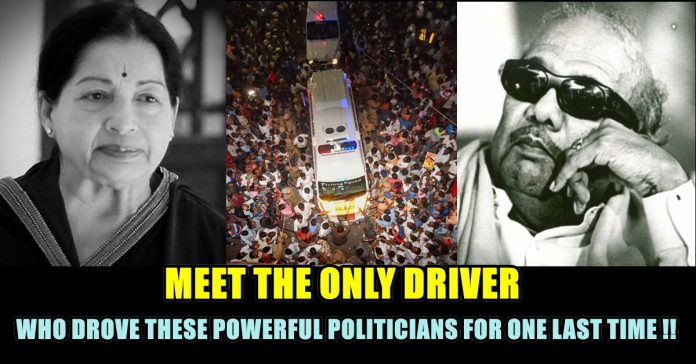 Meet The Only Person Who Drove Vehicle For Both Jayalalitha & Karunanithi During Their Last Rites !! As M Karunanidhi meets his arch rival J Jayalalithaa in the proverbial afterlife – the Dravida movement doesn’t believe in afterlife to begin with – they leave a huge void. A void that experts say will not be filled in a long time. Political punditry aside, we know nature abhors vacuum. And the air is thick already with expectations of a future pair of rivals already on the horizon. Eventually an interesting fact grounded in the death of both the legendary leaders. Man who drove the ambulance for both the leaders from hospital after their death is the same. Jayalalitha who died on 5th December 2016 was chief minister of Tamilnadu. From 1989 she was the general secretary of the All India Anna Dravida Munetra Kazhagam (AIADMK), a Dravidian party whose cadre revered her as their Amma (mother), Puratchi Thalaivi (revolutionary leader) and Thanga Tharagai (golden maiden). On the day she died her body was took from Apollo hospital to her Poes Garden house in an ambulance. In her house she was kept in Sandalwood shell and took to Rajaji hall. The ambulance was drove by P.R.M.M Santha Kumar (58) from Chennai, Kilpauk.

He was conducting a final pilgrimage accessories providing company called “Homage”. He is driving ambulance for dead popular politicians as his duty. In that way he drove the vehicle for dead leader Kalaingar Karunanithi from Kauvery Hospital to his Gopalapuram House. And he also drove his body from his Gopalapuram to Rajaji Hall. On driving two of the most powerful politicians of Tamilnadu on their final ride and playing a vital part in it, Santhakumar told :

“I have initiated “Homage” on 1977. It was my duty and I feel really proud to drive ambulance for important leaders on their one final ride. I have drove for Late chief minister J.Jayalalitha, Actor Sivaji Ganesan, Journalist Cho on after their death. Now for Kalaingar Karunanithi also I’m the driver.

There will be thousands of people around popular politicians like them when they are alive. But when they are dead I’m seeing it as a boon to do service for them by being in their side. I have done it with respect and devotion for Kalaingar karunanithi also” he said.

Well, it is indeed a boon for someone who do this as their duty. What do you think on this comment below !!

Previous articlePriya Bhavani Shankar Opens On Rajinikanth & Kamal Haasan Entering Politics !! She Doesn’t Look Happy !!
Next articleKalaignar’s First Massive Protest For The Love Of His Language !! He Was Just 29 Then !!

As soon as Raina posted a couple of tweets reporting about the crime committed by miscreants against his family members, many influential personalities including...