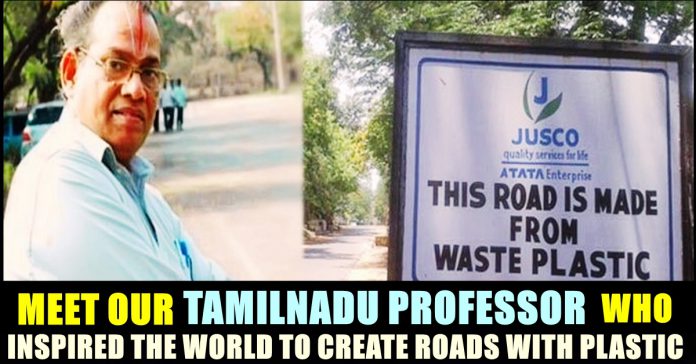 The use of plastic products has increased significantly in the recent past, with many enterprises joining the industry and many more varieties of plastics being made. Firms consider plastics easier and cheaper to manufacture as compared to other materials. Consumers also consider plastics lighter, compared to other packaging materials. As we all know, plastic would take centuries to decay and we are all finding ways to reuse and recycle it.

In a way of resolving the difficulties we face in getting better roads for our country and in recycling the harmful plastic, an Indian scientist who was born in Tamilnadu has created a technique to make our streets out of recycled plastic which is now being used by the world countries.

Being an Indian, Mr. Rajagopalan Vasudevan is a scientist who has worked mainly in waste management. Rajagopalan Vasudevan has completed his Master’s in science in Madras university where he also completed his PhD in the year 1974. He is currently working as a professor in Thiagarajar College of Engineering. He developed an innovative method to reuse plastic waste to construct better, more durable and very cost-effective roads. His idea of shredding the plastic waste, mixing it with bitumen and using the polymerized mix in road construction gained him India’s fourth highest civilian honour Padma Shri in the year 2018.

His idea is widely being used in the rural parts of our country. This method of the scientist will help in making roads faster unlike tar roads and also will save the environment from dangerous plastic waste. In his method, the amount of using bitumen is also very less and water has no effect on the surface of a plastic road. The plastic also improves the quality of flexible pavements and also said to be twice as stronger as ordinary tar road.

Currently his technique is being used in Panchayats, Municipalities, even by the National Highways Authority of India. Recently NHAI expressed it’s intention of using this method in the National highways. According to India Times, 1,00,000 kilometres of roads in India are already made of Plastic with lot more to be converted soon.

This unique technique of our scientist is being used across the world. Using this similar technique, the government of Indonesia is involved in constructing roads in plastic. In the Northeast part of Netherlands, this method of plastic roads is being used. The United Kingdom has also announced that it is going to invest a large sum of money in the trial of plastic road technology. It is also currently being implemented in cities in Gloucester, London, Durham says source.