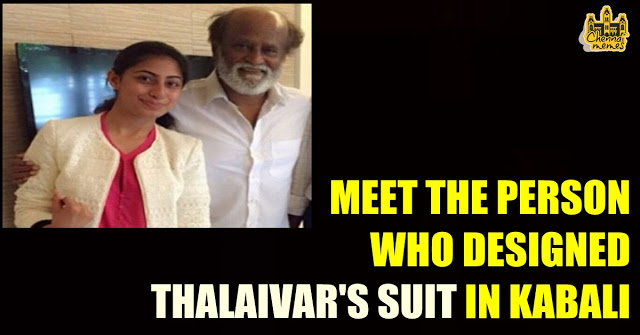 Meet The Person Who Designed The Dress For Rajnikant In Kabali

Loving the Superstar’s new look in the promotional content for his latest movieKabali? Meet designer Heeba Sait of Chennai-based Gatsby Collection and luxury menswear brand Aliph, who has put together some of the stylish pieces he has been sporting on screen.
Anu Vardhan, who was responsible for Ajith’s slick wardrobe in Billa andArrambam, is also the costume designer for Kabali. She approached Heeba and her husband Omar Sait to work on some of the outfits. Heeba says, “Anu had a certain vision and idea, and we worked closely to achieve a synergy that ensured that we were going in the same direction.”

While Rajinikanth has never had any qualms about appearing in public as he is, he has never sported an all-out salt-and-pepper look in his movies. He has, of course, appeared in older avatars in Baasha, Annamalai and Muthu, among others. “We wanted to create a striking and powerful look to go with his new onscreen image. We worked on making everything unique, as we did not want to repeat anything that has been done before,” says Heeba.

This might have arguably been a tough ask: from his first movie Apoorva Raagangal, the star has sported several dapper looks in a suit and tie. And, they’ve gone on to become iconic: as the don in Baasha, gangster in Billa (1980), and businessman in Mr. Bharath. In recent years, if not as part of the story, he has been dressed up similarly for song sequences in Enthiran, Lingaa and Sivaji.
“The clothes that were eventually picked were all made of unique fabrics, including a jute-finish one, from our unit in Italy. We picked colours like khaki that would look best on his skin tone. For boldness, there were a lot of plaids and checks as well. Everything was handcrafted by our ateliers,” explains Heeba, adding that a lot of detailing went into creating the look, which included exaggerated lapels and three-piece suits. The first-look poster of Rajinikanth seated in a glass-walled room with the Kuala Lumpur skyline in the background features one of the six suits they made.
On working with the superstar, Heeba says that he was one of the easiest people to work with. “He is so humble and down-to-earth. The only brief he gave us was that he should be comfortable, as he would be shooting for long hours in the outfits. Otherwise, he gave us full freedom of expression when it came to design and material. He brings so much charisma wherever he goes, and we were pretty much in awe of him, not least because of his star status. When we were discussing ideas, he spoke with so much technical knowledge of clothing. He is effortlessly stylish,” she says. During the fittings, Heeba adds, he made sure to try out some stunts and moves to ensure that everything was perfect.
It’s a proud enough moment when a man who is adored by millions across the world is sporting your creations on screen. But Heeba has one more reason to be pleased with herself: Rajinikanth was so happy with their work that he also got them to make a few clothes for his own use. “He usually wears a lot of white, so we did a few personalised kurtas in silk cotton for him,” she says.
Catch the teaser trailer of ‘Kabali’ here:

Previous articleBEWARE : Now Facebook Will Ask For Legal Notice To Remove Any Post
Next articleLove Ghosts? Wanna Meet Them In Chennai? Here’s A List Of Haunted Places In Chennai Which Will Thrill You!