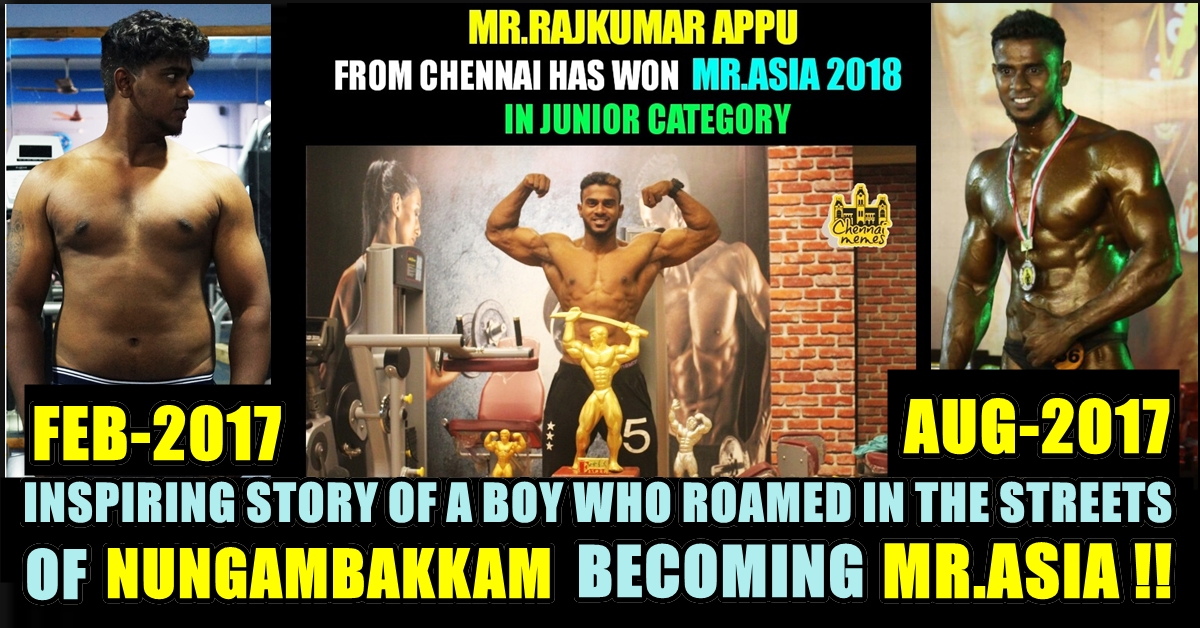 As anyone engaged in bodybuilding will tell you, the process of building and sculpting muscle is one that requires intense focus and commitment. A dedicated diet and exercise regime is absolutely imperative to achieving bodybuilding goals. And as important as diet is, bodybuilding exercise is even more important. Rajkumar Appu, 23 year old young lad has won the title of Mr.Asia in junior category which is indeed a proud moment for all of us. Coming from a mediocre family background from Nungambakkam, through his passion towards bodybuilding, Rajkumar has already won Mr. Chennai 1 time and Mr. Tamilnadu 5 times. Before becoming a gold medalist of Mr. Asia, Appu Rajkumar also won Mr. India a couple of times. One could think that these numbers are earned by this man by working hard for atleast 5-8 years but to our surprise Appu says that he only started his bodybuilding career in 2017. “Without much support and guidance I started my career in the year 2017 by joining a gym with the help of my friends. Initially I participated in a competition with the suggestion of my friends after which I came to know what it takes to be a body builder. Then I realized without money nothing could be achieved in this field as I don’t have my family support as well. If I joined in some other job for money that would distract the concentration i have on body building. So that I joined as a gym trainer and earned money for my competition. I stayed in gym almost all day long and trained for the competition which helped me to win the Mr. Chennai title initially.” says Rajkumar to Chennai memes while talking about the hardship he came through. “Only when I won the title of Mr. Asia my family started to have the believe in what i do. The moment when my father (Sundar) hold the poster of me in the airport during my return is something that I would cherish all my life. Nothing in the world is worth more than that.” says emotional Rajkumar. “Everyone is saying that i would be done with body building as i have achieved this much. The truth is I am seeing this as a starting point of my career. Even if i get married or whatever i would continue body building. Body building my everything and I am ready to sacrifice anything for it. Till becoming India’s best body builder i would never quit” he added. “No company or sponsor approached me for my sponsorship till now. I am spending my own hard earned money to achieve in life since the day I started. If I get a sponsor I would hustle even more harder to make India proud.” Rajkumar Appu says with the delight in his eyes. “Without the help of my mentors I couldn’t have reached this height. I am very much thankful to my masters Mr. Angu raj and Mr.Murthuza Rashid and I dedicate this title to them” Rajkumar says with his whole heart.

It is the right time to encourage a young talent like Appu who is working hard to make his dream come true. Comment your wishes for him !!

“If Virat Fails To Score Century, He Should Retire” Says This Australian Fast Bowler !! Check Out The Response !!
KL Rahul Said That He Is Happy For Mayank Agarwal !! Got Extremely Trolled !!
Advertisement