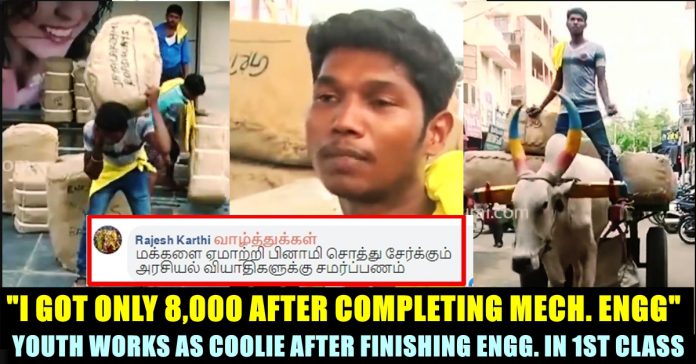 On May 1st, International Labour Day today, political leaders took to Twitter to wish the workers and labourers of the country. On workers’ day, they saluted their hard work and the toil they do every day for a prosperous nation.

Labour Day or May Day honours the hard work of workers across the world and celebrate their achievements. It is an annual public holiday in many countries. Labour Day has its origins in the labour union movement in the United States in the 19th century when the industrialists used to exploit the labour class and made them work up to 15 hours a day.

On this special day, a video released from Puthiya Thalaimurai winning hearts and breaking it at the same time. The video shows a young lad introducing himself as Loganathan. He is an engineering graduate who completed Mechanical Engineering in 1st class. Having a younger brother as sibling, Loganathan works as coolie for a living.

The 26 year old youth seen explaining about the struggles he is going through in his life. “I completed B.E and went for a job in Chennai. Got 8,000 as salary in my first month. That job has not worked out for me. My family have been facing financial struggles at that time. I know this job since my childhood, so I have joined in this.” says Loganathan about why he returned to his hometown.

“The pay depends on how hard we work. We could not point fingers and anyone. It is possible to lift 100 bundles per day if there is work. If there is no work, there would be 70 bundles to lift. I will get 10 rupees per bundle.” says Loganathan.

“Though it causes pain in different part of my body, I must do it to run my family. Everyone will ask me to go to while collar job as I have studied, even my mother will ask me to do it, But I like this Job. I am very proud that I am not betraying someone or making fool out of someone to make money” Loganathan says in the video.

Let us wish this courageous youth a very happy labourers day !! What do you think on this video ?? Comment your views !!
Source : Puthiya Thalaimurai

“Anbu Died In “Kaithi”, How He Returned??” Fan Asked!! Here’s How Loki Replied

For Radha Ravi's derogatory speech against actress Nayanthara, Social media erupted and came in for her support. Starting from Chinmayi who is a representative of...

This Is Why Sivakarthikeyan Donates His Salary As Lyricist To Na.Muthukumar’s Family ??

For past one week, a report on multifaceted Kollywood star Sivakarthikeyan donating the remuneration that he earns from writing lyrics to the family of...