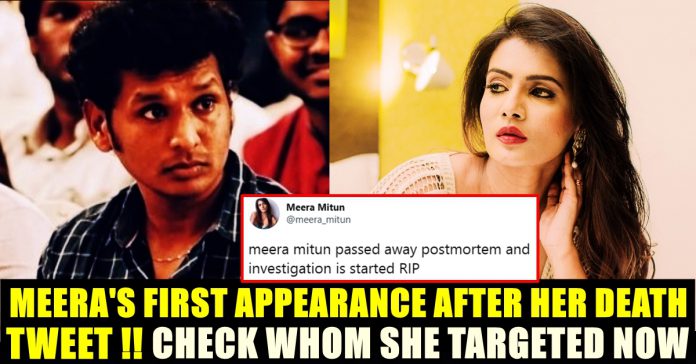 Days after the death tweet of Meera Mitun surfaced in her official twitter account, the aspiring actress came up with a video saying that she feels happy to be back. The tweet created huge controversy at the time it was uploaded and became the highest liked tweet of the model with 14 thousand likes. Since the controversial tweet, the actress hasn’t got involved in any kind of online activity. When media channels approached her mother about the tweet, she said that she doesn’t know the whereabouts of her daughter and started crying. Now, Meera Mitun came up with a series of tweets degrading actor Vijay,Suriya and director Lokesh Kanagaraj.

The tweet was posted on 11th of September and there were no tweets from the twitter handle till today. Now, she became active as before by accusing the top-tier actors. The former Bigg Boss star who is known for her controversial allegations against high profile individuals in film industry, has been constantly posting tweets against highly paid actors of Kollywood.

After making her re-entry to twitter after 6 days, Meera Mitun accused the trending poster of “Kamal Haasan 232”. On Wednesday, Director Lokesh Kanagaraj and actor Kamal Haasan has announced that they will be working together in an untitled project and it will be released during the summer of 2021.

As soon as the announcement poster released, it trended India wide with the fans and celebrities of Kollywood expressing their eagerness towards the project. Now, Meera Mitun, has posted a tweet accusing director Lokesh Kanagaraj by saying that he is copying the works of others. She said that Lokesh is not using his creative brain and acknowledged a tweet which said that the poster of “Kamal Haasan 232” is a copy of “The Amityville Horror”, a french film.

“As if there is only one director in Kollywood Lokesh Kanagaraj who doesn’t use his creative brain but copies others work just like #Master poster copied from my copyrighted pictorial pose” her tweet read.

Haha well said @kaultheking 😁 As if there is only one director in Kollywood @Dir_Lokesh who doesn’t use his creative brain but copies others work jus like #Master poster copied from my copyrited pictorial pose 👿 https://t.co/CvdKAE5hWw

On 15th of March, Meera Mitun posted a tweet saying that the second look of “Master” copied from one of her pictures from a photoshoot.

Who copied Whom 🤪 Well this is my kingfisher ramp after show pics dec 2k19 😉😎 So answer known lol 👻 @MasterMoviePage #MasterAudioLaunchDay pic.twitter.com/m2rCkMzbbX

Further she also posted a tweet against Suriya and actor Vijay by quoting a press release made by actor Ajithkumar.

This is why everyone loves #Ajithkumar and not like @Suriya_offl @actorvijay who are motormouths. pic.twitter.com/sYHSfUI90v

Relaxing in Mumbai 🤑 Happy to be back on @TwitterIndia ✌️😍😈 pic.twitter.com/M91u9DQcSN