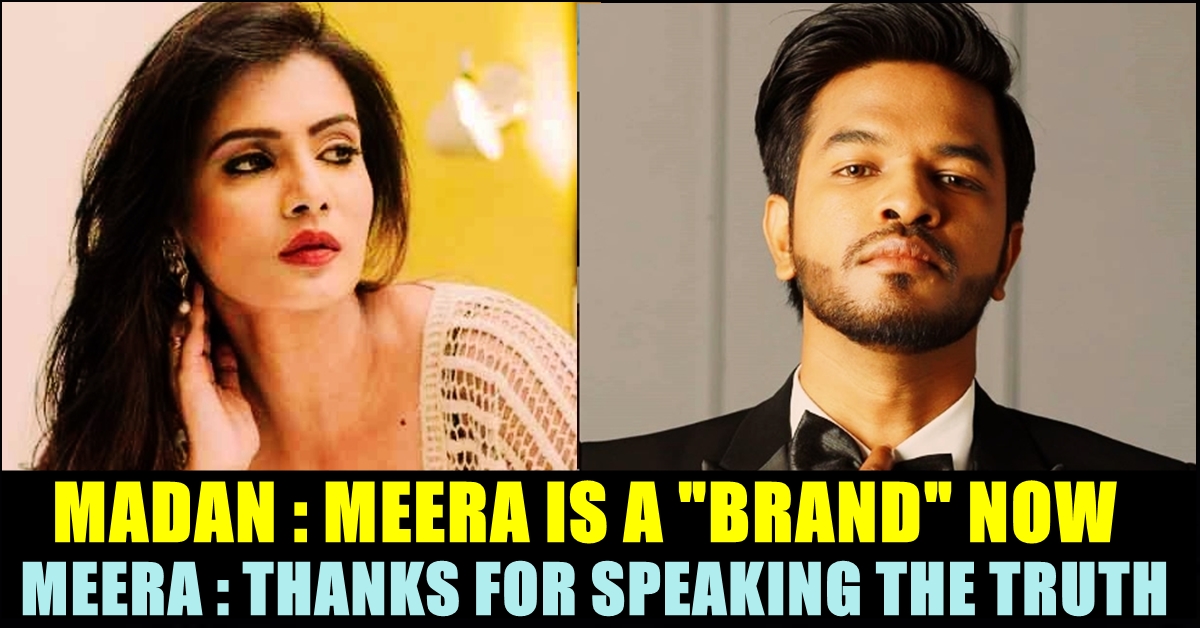 For stating “Meera Mitun” is a brand in one of his videos, Madan Gowri, a popular Tamil youtuber forced to give clarification as the controversial Bigg Boss participant used the clipping to upload in her Twitter timeline. Madan Gowri, through his tweet, clarified that he said it in a “sarcastic” tone and explained how much the actors Meera Mitun has been defaming all these days means to him.

Former Bigg Boss contestant Meera Mitun has been making baseless allegations against actors Vijay and Suriya for past few weeks. She said that they both are the product of Nepotism and involving verbal spat with the fans of the actors in Twitter. Apart from Vijay, Suriya, Meera Mitun also degraded Superstar Rajinikanth and Ulaganayagan Kamal Haasan. Read : Legendary Director Of Rajinikanth & Kamal Haasan Reacted To Meera Mitun Issue !!

The press release of Bharathi Raja made actor Suriya to react to the issue. The “Ayan” actor asked his fans to get involved in constructive activities instead of wasting energy in replying to derogatory comments. “My brothers and sisters should spend their time and energy in constructive activities. I thank Bharathi Raja sir with my whole heart” he said.

With fans of the leading actors has been acting against Meera Mitun in the micro blogging social media site in daily basis, Madan Gowri, a popular youtube influencer of Tamil youtube community, said that Meera Mitun has became a “Brand” in a question and answer session he conducted with his followers.

To a follower who asked “Meera Mitun ku neenga Anna?”, Madan said that he is definitely not an elder brother for Meera Mitun as she is a senior as far as age is concerned. “Many people are trolling her and making videos about her nowadays. But the fact is she became a “view puller”. Even her photo in a youtube video’s thumbnail is all enough to make people click the video. Not for fun, I am saying it seriously. If I keep her picture in thumbnail for this video, people will click it for no reason. That proves how she became a brand now” the youth said.

Cropping the particular clip from his 14 minute long video, Meera Mitun uploaded it in her official twitter user by thanking him. “Thanku Madan
for speaking the truth. I think you are sane person in TN to accept both the pros & cons of the person. Keep doing good work” Meera wrote while sharing the tweet.

Thanku @madan3 for speaking the truth. I think you are sane person in TN to accept both the pros & cons of the person. Keep doing good work 👍 pic.twitter.com/lTXQU2yVuq

As soon as this tweet from Meera blew up, fans of Vijay and Suriya started reacting as a result of which Madan added a tweet saying “Naan sarcastic-a sonen makkale!”

He also added a tweet writing how much admires Ajith, Suriya and Vijay.

I am proud that Tamil industry has the greatest actors of our times.

Ajith: My greatest inspiration and for all normal youngsters in TN. 🔥

Suriya: The human I respect the most for Agaram. Real life Vaarnam Aayiram. 💯

He also replied to Meera Mitun’s tweet asking her not to drag actors like Suriya, Vijay and Ajith in Social media fights as he is a big fan of them and grew up watching them.

Hi, I wanted to clarify that I am big fan of Vijay, Suriya and Ajith, I grew up watching them. I will be happy if their names are not dragged into social media fights. Peace Out. ✌️

Thanku @madan3. This is not a social media fight, this is my war against #Nepotism #kollywoodmafia 4dfuture. Also giving it back in my style to the actors who are working behind screens to Slander my feminity @Suriya_offl @actorvijay. No way #ajithkumar is involved in this. https://t.co/MCVmknbEIf

Hotel Owner Wants To Open Branch In “Kailaasa” !! Check Out His Letter To Nithi
Hansika Started Concentrating In Business Due To Lack Of Film Offers ?? Check Her Reply
Advertisement