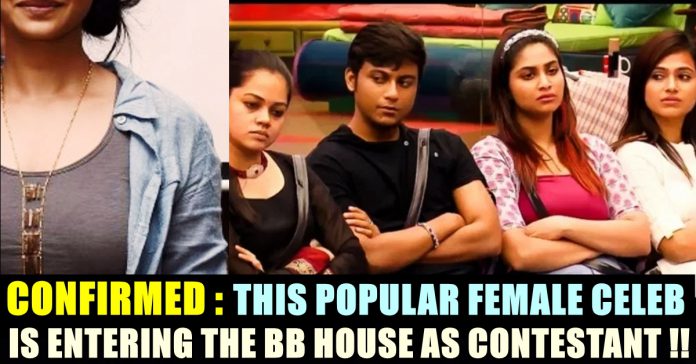 After Archana, one more popular female personality is going to enter the Bigg Boss house as wild card contestant. The news which was doing rounds in social media platforms as speculation, got confirmed after actress Kasthuri who participated in the previous season of Bigg Boss as wild card entrant posted a tweet. She branded the contestant as “Meera Mitun 2 Point 0” in her tweet.

Suchi who was in limelight few years back for all the wrong reasons such as Suchi leaks etc, is now being lauded by the users of Internet for raising her voice for social issues. A video she made to create awareness on Jayaraj and Fenix issue gained global attention, as a result of which it became a subject to debate in national level. After that, she also raised voice against a number of injustice that are taking place in the society. She also involved herself in posting Bigg Boss related tweets.

To this tweet, a follower trolled the actress by saying that she is the one who got slipper shot in the house and got eliminated within a week. Replying to the tweet, Kasthuri said that he doesn’t know who got the slipper shot. “unmaiyile seruppadi yaaru vaangunathunnu ungalukku teriyathu brother.” her reply read.

Suchithra who could be spending her quarantine period before entering the Bigg Boss house, has been posting tweets about the movies she is watching. After watching recent Malayalam blockbuster “Trance”, Suchi came up with a tweet saying that Gautham Menon should enter Bigg Boss house.

“Always been a #Gautamvasudevmenon fan. Even if I don’t go in as a wildcard into #BiggBossTamil4 , he certainly should. Watching #TranceTheMalayalamMovie and he is just superbbbbb. can generate amazing content am sure” her post read.

Always been a #Gautamvasudevmenon fan. Even if I don’t go in as a wildcard into #BiggBossTamil4 , he certainly should 🔥. Watching #TranceTheMalayalamMovie and he is just superbbbbb 👍🏻 can generate amazing content am sure ♥️

Comment your views on Suchithra entering the house as one of the contestant !!

Previous articleFollower Criticized Maddy For Not Replying To Tamil Fans !! Check His Reply
Next article“50 Crore” Pakistan’s Very Own “Money Heist” Triggered Netizens To Have A Meme Fest !!

Balaji Murugadoss is super active in Instagram since coming out of the Bigg Boss house. He has been sharing the videos of children uttering...

People of state Tamilnadu shocked as 110 new cases emerged in one day. It technically increased total positive cases of the state to 234....