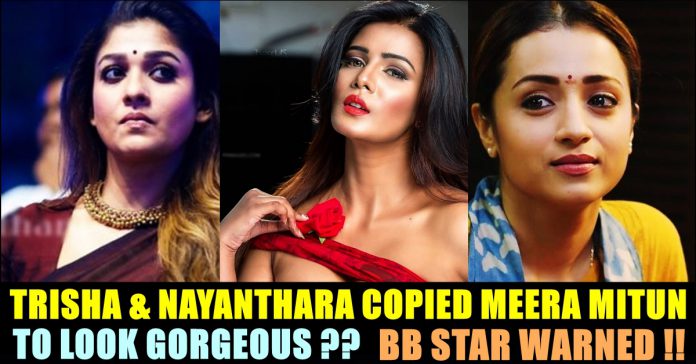 After that, she even slammed Kollywood filmmakers for using her name for the lead characters of their films. Now, to our shock, Meera Mithun, openly criticized actress Trisha and tagged her in her official twitter account to warn.

Meera, in her tweet said that she is going to warn Trisha for one last time for copying the features of her including hair. She accused Trisha for morphing her photos in photoshop to look like her. She threatened Trisha about a legal suite and asked her to Grow up and Get a life. “Tis s gonna be my last warning to you Trisha. Next time I see, you photoshop ur picture with features of mine including hair, morphing to, look like me, you will be under serious legal allegation . You know what ur doing, Well ur conscience knows. Grow Up! Get a Life.” read the tweet of Meera.

Tis s gonna be my last warning to you @trishtrashers. Next time I see, you photoshop ur picture with features of mine including hair, morphing to, look like me, you will be under serious legal allegation . You know what ur doing, Well ur conscience knows. Grow Up! Get a Life.

Followed by this, Meera posted another tweet writing “You Were Born Original, Don’t Die A Copy Bitches”. She added a picture of herself while uploading this post.

You Were Born Original 😎

If you are aware of Bigg Boss show’s third season in Tamil, you must have known about Meera Mithun , one of the most controversial participant of the show. One of the highly controversial episode of the season is undoubtedly the one in which Meera Mithun accused Director Cheran of physical harassment.

Check out some of the reactions for her recent tweet :

Followed by her Bigg Boss stint, the actress involved in many controversies and several audio conversations of herself with her accomplices leaked. She was removed from movies like Namma Veetu Pillai, Agni Siragugal for various reasons. In one of her interview, Meera Mitun even alleged that all the boys who participated in Bigg Boss show loved her.

“Aishwarya Rajesh With Her Mother” This Media Page Posted A Picture !! Check How Aishwarya Reacted !!

Online fans are always desperate to know about the details of their favourite celebrities. Using this opportunity there are plenty of fan pages and...

Not many days ago, an couple of under aged kids were called out and legally handled by authorities for posting romantic videos in their...