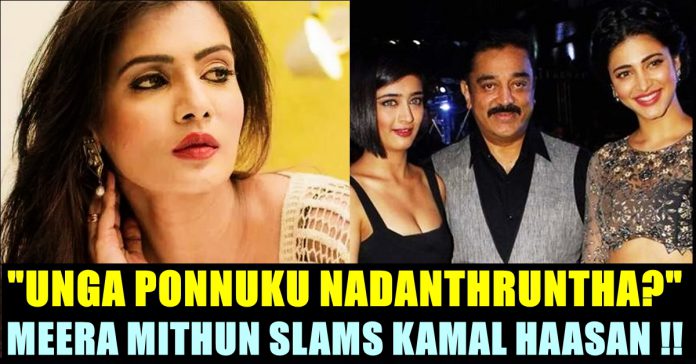 Meera Mithun who said that she is going to post videos in daily manner against those who opposed her, is keeping her word it seems. Yesterday, Meera who said that the contestants of “We are the Boysu” gang loved her inside the house, now brought back the popular issue of herself with Cheran after all these days. WATCH : Meera Mithun Says That “We Are The Boys” Gang Loved Her !!

Meera Mithun is keeping the followers of her social media accounts busy by uploading videos and posting controversial tweets day after day. If you are aware of Bigg Boss show’s third season in Tamil, you must have known about Meera Mithun , one of the most controversial participant of the show.

As the incident happened nearly 2 months ago, Meera has now uploaded a series of tweets questioning Cheran and Kamal Haasan. “I am going to talk about Cheran sir today. Now Cheran is portraying himself as a holy man. Initially he said that he won’t touch girls and said that he won’t even prefer handshake with them. But he behaved very much close to the every female contestant inside the house” said Meera in her video.

Those horrible 25 minutes with @directorcheran inside #BiggBossTamil3 house, that paved way for my eviction from BB. Will ever single women get justice. Is #Metoo in TN sleeping. @Chinmayi @vijaytelevision @kaajalActress @cineulagam @IndiaToday @meghakaveri @PTTVOnlineNews. pic.twitter.com/dEqu8ftYA4

“He developed a story of my manhandling accusation as he is a good script writer and director. Even Kamal Haasan didn’t see the justice in my side. I don’t what they both would do if the same happened to their daughters” said Meera Mithun.

She also posted another video saying that Cheran has “inferiority complex”. She accused him for not asking “Apology” and slammed every other contestant for not supporting her.

Our #BiggBossTamil3 youth are till now silent watchers of any kind of harrsament to women. When they will voice out without fear. pic.twitter.com/9yydXb6Rxu

What do you think on these videos posted by Meera Mithun ?? Comment your views !!

Previous articleLalitha Jewellery Robbery Main Accused & AIDS Patient Murugan Had Affair With Young Tamil Actress ??
Next articleFan Blamed Indian Captain Mithali Raj For Not Speaking In Tamil !! She Gave Him Back In Style !!