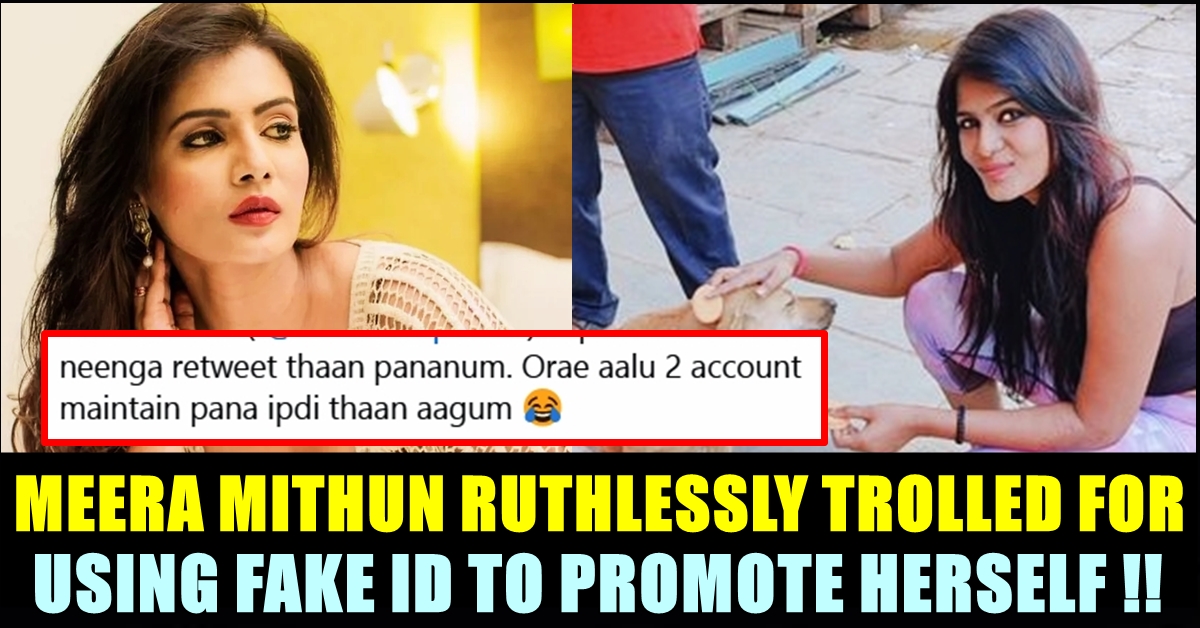 Meera Mithun who said that she is going to post videos in daily manner against those who opposed her in one of her video, is keeping her word and posted videos against Cheran, Kamal Haasan, Kavin, Sandy, Mugen, Tharshan so far. Now the supporting actress who appeared in films like “Thaana Searntha Kootam”, “8 Thottakal” is getting hilariously trolled by her followers, not for her video, but for a tweet which surfaced from her very own account.

The tweet which was posted on October 16 showed Meera Mithun feeding a stray dog somewhere in North India. Followers of Meera didn’t have problem with her feeding the dog but the caption of the post instigated them to troll her ruthlessly.

Caption of the post said “Feeding stray dogs at sion koliwada and she loves dogs and her pet is dog.”

Feeding stray dogs at sion koliwada and she loves dogs and her pet is dog. pic.twitter.com/tHaiFSt2Zz

Usually Meera Mithun would share the posts of her fans whose tweets will appreciate the looks and behaviour of the Bigg Boss contestant. For past few days, Meera was seen constantly sharing tweets of one particular account, named as “Kaul Brahmin” which tweeted posts in favour of Meera.

After seeing the post of Meera Mithun about “Stray Dogs” which was posted in a third person perspective, followers discovered that both the accounts are handled by a same person. They started trolling Meera for using fake accounts to promote herself. Check out some of their comments below :

"She loves dogs and her pet is dog"

The me in me talking to the me in u , antha mathiri tweet pota ippadi than nadakum swami meeranada , jai bahubali 🐚