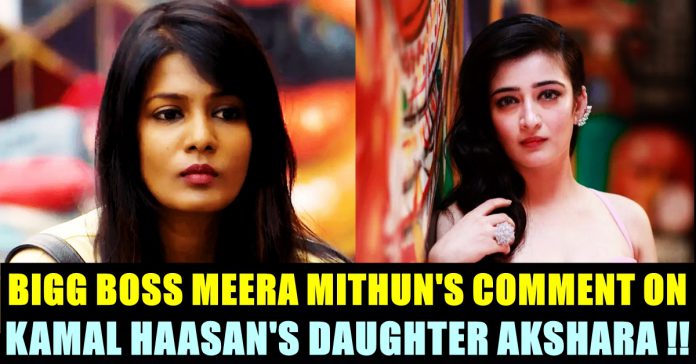 The film which is being produced by Amma creations T. Siva, has Arun Vijay and Vijay Antony in the lead. The makers initially announced that they are having Meera Mithun in a significant role. Noe Meera Mithun posted a tweet saying that Akshara Haasan has replaced her role in the film which was titled as “Agni Siragugal”.

“Am removed from the movie and all of ya all know who has been roped inn now in my place for the movie @agnisirugugal 🙂” Meera wrote in her first tweet.

Followed by this she posted another tweet revealing that Akshara Haasan has replaced her. “Plz check above tweet, am removed from this movie and Akshara Haasan is roped inn.”

Plz check above tweet, am removed from this movie and Akshara Haasan is roped inn.

The actress posted the picture of herself with the actors of Agni Siragugal earlier in her Instagram account.

What do you think on Meera Mitun getting rejected by project after project ?? Comment your views !!

Debut director Arun Matheshwaran who has been committed to direct actor Dhanush's one of next movies, offered to book ticket for a fan who...

Wuhan, a city located in China where the first case of COVID 19 is registered, celebrated pool party yesterday only to leave the rest...