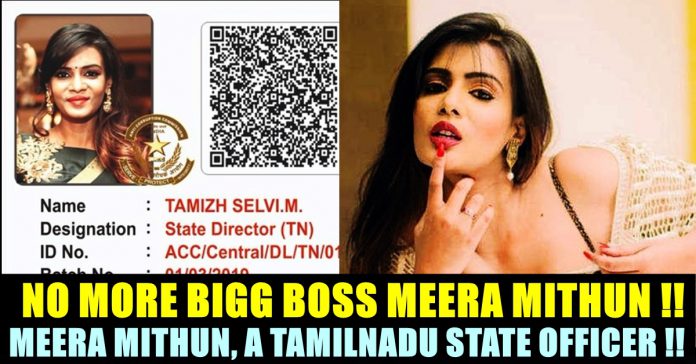 Meera Mithun who is grabbing the headlines for all the wrong reasons, has now shocked her followers with a recent announcement. After the end of Bigg Boss season-3, Meera Mithun, one of a female contestant is very much busy in social media platforms, especially in Twitter. Being one of the most controversial contestant of the Bigg Boss show, Meera Mithun accused almost every housemate who participated along with her in the reality game show. To an extent, she even accused Kamal Haasan, the host of Bigg Boss Tamil.

I am now the Director for Chennai Tamilnadu State in Anti-corruption commission ( A.C.C ), no one can hide hereafter and i am watching. Ini odavum mudiyathu oliyavum mudiyathu @pinkvilla So join hands with me to bring a new age of corruption free State. @IndiaToday @THNewDelhi pic.twitter.com/pMKPvUJY2u

Corruption, the biggest reason for the downfall of most empires and civilization. Some group of people can tolerate corruption as long as their leader champion their religion or race, some will tolerate bribery as long as they champion their own pockets. I’ve lived long enough shouting anti-corruption slogan against the government having no problem bribing a police officer and vote for a leader of their choice as long as these leaders championed their own race. But here comes the twist and buckle up everyone iam now the Director for Chennai Tamilnadu State in Anti-corruption commission ( A.C.C )and no one can hide hereafter and iam watching. To say in Tamil odavum mudiyathu oliyavum mudiyathu. Join hands with me for a corruption free State.

It is notable that Meera Mithun was earlier accused in several fraud cases regarding her fashion shows. Many of the followers of her are in awe and few even questioning her if it is fake or real.

Meera, how far the logo and the letter is true? pic.twitter.com/yd5V4AOuIh

@FactCheck please verify and tell wheather is this true ?

What do you think on this update of Meera ?? Comment your views !!

Sai Pallavi Opened On Why She Always Opting For Saree !!

Actress Sai pallavi who is currently busy promoting her upcoming film "Gargi", in an interview with VJ Parvathy, talked about the importance of condoms....