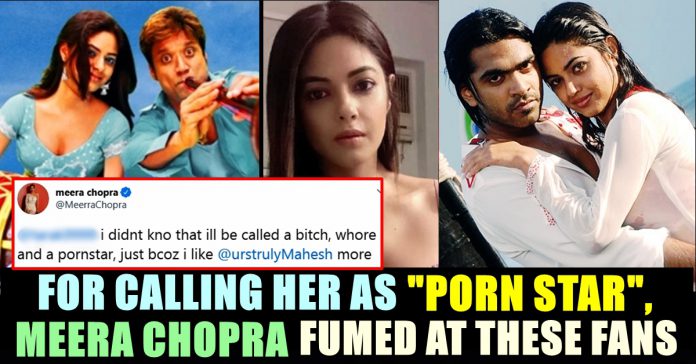 Due to this lockdown situation, cinema starts, especially heroines are conducting chat sessions with their fans and followers in social media. Meera Chopra who is popularly known among tamil audience as Nila, acted in films such as Anbe Aaruyire with SJ Surya, Marudhamalai with Arjun and Lee with Sibiraj. After few cameo appearances in Tamil, the actress started concentrating in Bollywood films. Recently, She conducted a chat session with her 65 thousand followers in twitter. It is notable that the actress is a cousin sister of Priyanka Chopra and Parineeti Chopra who are known for their works in Bollywood industry.

Whenever a celebrity who belongs to Indian film industry conducts a Question and Answer session in online platforms with their followers, Fans of top heroes would storm into their comment section only to ask them to make them say “one word” about their favourite hero. In many occasions, actors were forced to praise the commenter’s favourite actor with having no choice left.

Many celebrities would avoid such questions if they feel that they are irrelevant and few would answer to them to gain their support. Meera Chopra was questioned by many fans of top heroes.

Surya is a darling nd rajni sir is a legend https://t.co/x8y0w8nogg

One of a fan of Junior NTR asked the actress to say a word about his favourite actor and the actress, immediately said that she doesn’t know him. “I don’t know him, I am not his fan” the actress said while replying to that fan. The fan deleted his comment after her reply. Check out the screenshot here :

For this comment, many of the fans of the actor started attacking the actress through their comments. They got extremely angry on the fact that the actress likes Mahesh Babu the most.

We also don't Know you
Infact,
You are nothing infront of his acting.

Junior NTR is yet to reply to this tweet of Meera Chopra !!

Previous articleSimran Reacts To The Fake News On Replacing Jyothika !!
Next articlePrasanna Accused Tamilnadu Electricity Board !!

Celine Gounder, Assistant Professor in the New york University Grossman school of medicine, has been appointed as a member of the Coronavirus taskforce of...