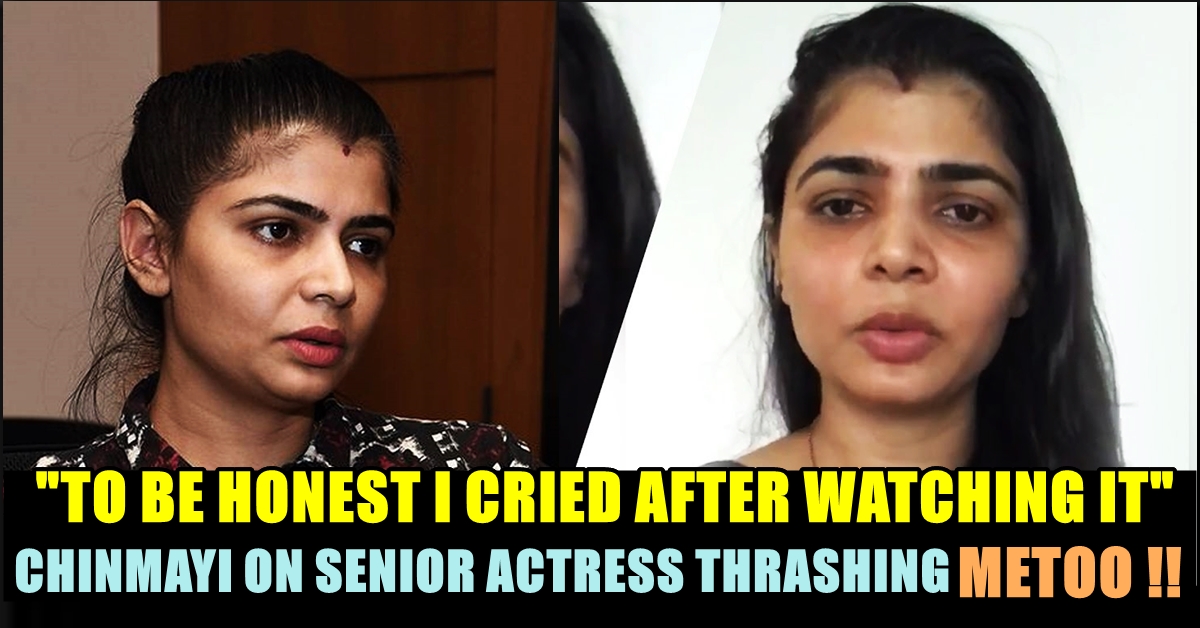 “Before #Metoo, I used to sing three songs a day. After an album as successful as 96 (movie), in which I had dubbed for the lead actor as well, I should usually get work for the next one month. But, after my involvement in the #MeToo movement, there has been a silence. In a month, I used to do 10-15 songs, out of which 5 songs would be in Tamil. This has dried up as well. And then, the dubbing union terminates me. I realised it is not a coincidence. Recently, I had signed on to dub for two movies, which were subsequently cancelled.” said Chinmayi in the recent interaction with Hindu. She has been asked by the dubbing union to pay Rs 1.5 lakh as membership fee and write an apology if she wants her membership back. The union took away her membership last month for non-payment of subscription fees. However, she said she did not receive any notification about it. The dubbing union is headed by actor-politician Radha Ravi, who was accused of harassment during the MeToo movement. Chinamayi had voiced her support towards the women who had accused him.

“Apparently I have to pay 1.5 Lakhs, send an apology letter and then the dubbing Union will reinstate me and let me work in Tamilnadu in Tamil films.The Union has made lakhs from my Income since 2006. And I have to pay 1.5 lakhs again for my right to work,” Chinmayi wrote in her tweet. The union said that if the singer pays Rs 1.5 lakhs advance, gives a registration letter like a new joinee and an apology letter, she can become a part of the dubbing union again.

“And I wonder why exactly I m being forced to *apologise* to the Dubbing Union and to Mr Radha Ravi? The Dubbing Union By Law says 2,500/- is the fee to become a new member. What is this random 1.5 Lakh fee + apology?

And the greatest take away from the Dubbing Union’ Press Meet – IF you complain of sexual harassment, quit the industry and go work as a housemaid (in precisely 10 houses)Other dubbing union female members vigorously applaud.
The Message? “Stay silent, or else.” pic.twitter.com/QmShBmJdVG

Now a recent video clip of ace actress Sowkar janaki and Y G Mahendran thrashing MeToo movement went viral on internet. In the video Sowkar Janaki seen saying that MeToo is nothing but a cheap publicity and just crap. “You could not prove anything through this movement but you are only hurting your husband, child and your parents by revealing unnecessary thing” says the actress in the video.

Chinmayi who says that she broke after seeing this video wrote “For those who dont know what the Sowcar madam and YGM sir interview is – THIS is the one. If I have to be honest, I did cry after watching it. “Nadandhadhu and Nadakkadhadhu” How MANY from the industry have shielded and protected predators? And the MeToo jokes – Slow clap.”

For those who dont know what the Sowcar madam and YGM sir interview is – THIS is the one.
If I have to be honest, I did cry after watching it. “Nadandhadhu and Nadakkadhadhu”
How MANY from the industry have shielded and protected predators? And the MeToo jokes – Slow clap. https://t.co/KZoGeCHDuN

Chinmayi was one of the most active voices in the South film industry to show their support towards the MeToo movement. She called out lyricist Vairamuthu for sexually harassing her when the two were in Switzerland for a concert named, Veezhamattom, in 2005. Vairamuthu had then released a statement denying all allegations, Chinmayi had then reacted by calling him a liar.

What do you think on the video of Sowcar janaki ?? Comment below !!

In The Past 4.5 Years , Check How Much Modi’s Foreign Tours Costed To The Government !! SHOCKING !!
If You Caught On Drunken Driving Tonight !! Here’s The Consequence You Have To Face !!