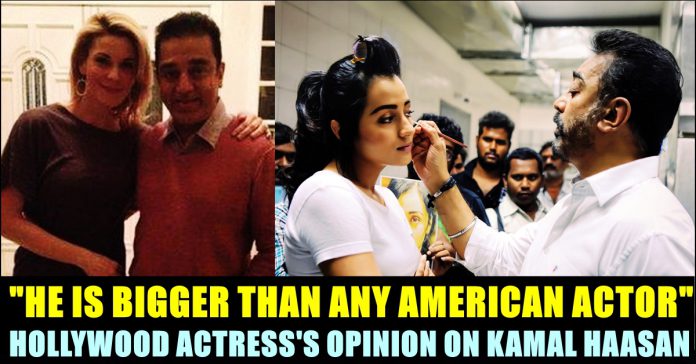 Despite of getting introduced in film industry as a child artist, multi talented Kamal Haasan started his cinema career as an assistant dance choreographer. He started singing since “Sigappu Rojakkal” under Ilayaraja’s supervision. He also involved in direction department and many of his films were written by himself. But the very lesser known fact about the actor is that he is also a trained make up artist who does make-up for his own movies.

Few years ago, in an interaction, Kamal Haasan revealed that he underwent training of 30-40 days with Academy award winning makeup artist Michael Westmore to learn the art of makeup. One of a Twitter page named as “Films and Stuffs” revealed the fact in the micro blogging social media site and added that he worked on the sets of Hollywood film Star Trek [1996] to learn make-up because there would be a lot of various creatures in the film.

Kamalhaasan underwent a training of 30 – 40 days with Academy award winning make-up artist Michael Westmore to learn the art of make-up.

He even worked on the sets of Hollywood film Star Trek [1996] to learn make-up because there would be a lot of various creatures in the film. pic.twitter.com/KPj678vP0E

Surprisingly, this post reached the twitter timeline of Mckenzie Westmore, daughter of academy award winning make-up artist Michael Westmore. She is known for her performance in the television show, Passions. She also acted in Martin Scorsese’s “Raging Bull”and in a film named as “Vile”. She remembered her childhood days where Kamal Haasan visited her home with beautiful gifts from India. “As a child I remember Kamal coming to the house bringing beautiful gifts from India! I was always in awe of him. Visiting him at his LA home was a dream too! I’ll find photos.” read her comment which received more likes than the post.

Followed by this, Mckenzie went on to share a picture of herself with Kamal Haasan which captured few years back. She uploaded another picture of her childhood in which she and her father were seen donning Indian attire which was gifted by Kamal Haasan.

These tweets of the American personality garnered wide attention from the fans of Indian cinema. Many Indian media outlets published her tweets as news which made her extremely overwhelmed.

Honored to be in so many wonderful articles! Just honored to call Kamal a friend 🙏🏼❤️ @ikamalhaasan #KamalHaasan pic.twitter.com/BNPGzOTIr6

Comment your views on this opinion of Mckenzie Westmore !!