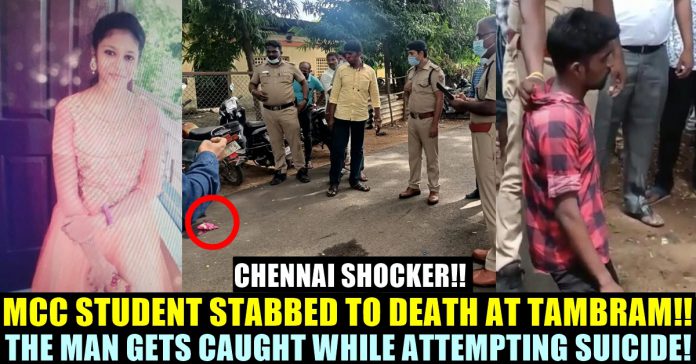 MCC Student Stabbed To Death At Tambram!! The Man Gets Caught While Attempting Suicide!!

On Thursday afternoon, an incident in Tambram shook the entire state of Tamil Nadu. Swetha, a student from Chrompet was slain by a youth. This murder took place during the day. The Selaiyur Police Department has begun navigating through the case.

Swetha M who was killed, is a second-year student pursuing a Diploma in Medical Laboratory Technology at the Madras Christian College’s School of Continuing Education. Ramachandran, a native of Thirukkuvalai, Nagapattinam District who has been working at a private manufacturing unit in Chennai has committed the brutal deed.

According to the police, Swetha had been invited by Ramachandran to a spot after her classes They have met near the railway station and have walked to the railway quarters. Police have been informed by the eyewitnesses on the scene that Ramachandran was involved in a heated conversation with Swetha. Following this Ramachandran took out the kitchen knife which he had kept hidden all the time and stabbed Swetha. When passers by started witnessing what was happening he attempted suicide. However, the people nobbled him and informed the police.

Swetha was declared dead. Ramachandran wasn’t dead is admitted in a hospital at Chrompet. From the information gathered, the police have claimed that Swetha and Ravichandran have been in a relationship. The police have told that the haze will be cleared once Ramachandran is in a position to speak.

A 20-year-old woman was allegedly stabbed to death in broad daylight on Thursday afternoon near #Tambaram railway station. Police said the assailant then attempted to kill himself but was stopped by public.#Chennai #Crime @NovinstonLobo@NewIndianXpresshttps://t.co/EUWXknhxsG

This incident has made passengers open up about how they feel insecure about the absence of CCTV cameras which can serve as a hindrance in performing attrocitious activities. This incident has nevertheless, reminded people of an incident from the past. In the early morning, Swathi, an IT Professional was killed by a youth, Ram Kumar at Nungambakkam Railway Station.

Previous article“Draupathy Is Better Film Than Madras” – Mohan G !! CHECK REACTIONS
Next article“Vivegam” Trending After The Release Of “Valimai” Glimpse !! Check Why

Ola Asked The Customers To Donate For The Drivers !! Internet Reacts

After lot of struggles, the film “Aadai” which was directed by Rathnakumar, “Meyatha Maan” fame, has hit the screens recently. The actress expressed her...