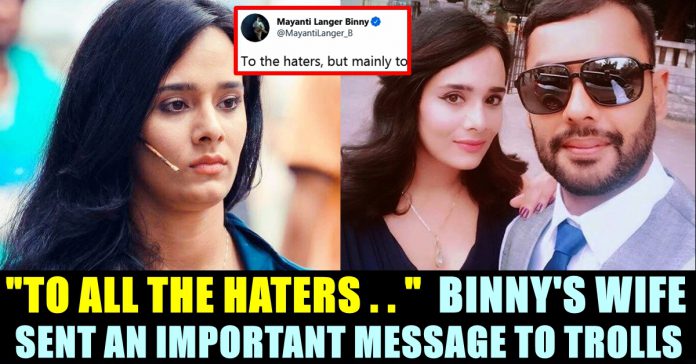 On Monday, Indian cricketer Stuart Binny completed his 100th list A game after stepping into the fifth round against Nagaland in the ongoing Vijay Hazare trophy. Expressing his happiness over achieving the feat, the all rounder took to Instagram and wrote “The day has come where I walk out for my 100 list A game … Blessed 😊” by uploading a selfie of himself.

The 36 year old cricketer made his List A debut for India Emerging team against Pakistan emerging team at Colombo during 2003. After playing for 17 long years consistently, Stuart Binny achieved the mark of 100 matches.

Binny’s wife Mayanti Langer who is known for presenting prominent sports shows, has always targeted by social media trolls whenever her husband fails to perform in his matches. Those who are keenly following IPL for years would have known definitely known about Mayanti Langer, a popular host who appears before the start of every match. She enjoys a separate fan base in India for the way she hosts the programs to entertain the audience.

However, she always had her husband’s back and is giving back to trolls every now and then. The couple got married in the year 2012 and the sports journalist gave birth to a beautify son last year. Now, after this achievement of her husband, Mayanti came up with a message to haters who has been trolling the duo all these years.

“A hundred that has been 17 years in the making. Hardwork and perseverance are only words until you bring them to life. Some just talk, Stuart Binny walks the talk. Congratulations on yet another achievement Champ ! #proud” she wrote in her official Instagram account.

To the haters, but mainly to the supporters 🙏🏼 pic.twitter.com/kTZ8brUwJw

This post from her garnered huge number positive reactions from her online followers. “I still remember his bowling performance agnst bangladesh where he took 6 wkts. A very low scoring game well defended by our indian team & it was binny who changed the game single handedly” wrote a follower whereas another one said “Nobody hates him. It’s just that people criticises when someone fails. That’s the tendency of Indian cricket fans, same happened to greats like Dhoni, Sachin and recently Pant”

Nobody hates him. It’s just that people criticises when someone fails. That’s the tendency of Indian cricket fans, same happened to greats like Dhoni, Sachin and recently Pant

It's a great achievement specially in the era where compitition has become so Tuf in all prospect & level of the games…Be there and complete 100matches it's hard earn but very sweet achivement…best of luck both of you for the future coming with many milestones ahead.😃

KUDOS, CHAMP! ANOTHER CHAMP!! When you saved India at Lord's you gave me so much of joy! When you made the Bangladeshi batsmen clueless, you made me proud!! In your own right! As son of Roger Michael Humphrey Binny & as the wonderful husband of one MAYANTI LANGER! CONGRATS, ALL!

Stuart is gem of a person no one can hate him . But yes he is not that good player who can play for India . Only bcz of his father he got the chance .

No one will deny the fact that Movie watching is an experience and it should be felt. But nowadays, people who are entering cinema...