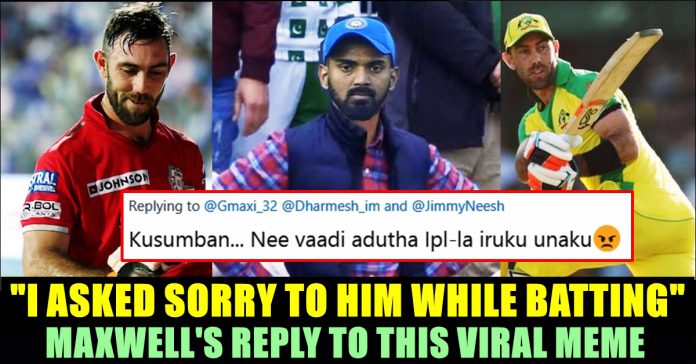 Glenn Maxwell left the cricket fans of India in splits through his reply to a meme that trolled him for swinging his bat well while playing for his nation and for failing to perform while playing for Kings 11 Punjab in IPL under KL Rahul’s captaincy.

Australia comfortably won the first one day internationals against India with the help of the centuries scored by Steve Smith and Aaron Finch. Apart from the knocks showcased by the duo, the cameo played by David Warner and Glenn Maxwell helped Australia to score the mammoth total of 374. Unable to chase the total within 50 overs, Team India lost the match by 66 runs.

Maxwell who came in as a middle order batsman for his team, smashed three sixes and five fours. With a strike rate of 236, Maxwell scored 45 runs in just 19 balls. The cricketer who was highly expected to help his Punjab team to get into the playoffs during the IPL tournament, disappointed the fans big time. In the 13 matches he played, Maxwell scored just 108 runs with an average of 15. Strangely, the cricketer who is known for his aggressive batting, didn’t smash a single maximum throughout the tournament.

Meanwhile, Jimmy Neesham of New zealand who also played for KL Rahul led Punjab team, scored 48 runs from just 24 balls and helped his national team win in a T 20 match against West indies on the same day. On seeing these match winning knocks of the duo, a fan made a meme by having KL Rahul in the centre. He inserted Rahul’s face in the popular meme template where a Pakistani fan would get angry on seeing a drop catch.

“KLRahul after seeing #Maxwell and @JimmyNeesh play crucial knocks for their respective national teams.” the use wrote as a caption to his meme. Check out his meme below :

What surprised fans is the reply made by Maxwell. He said that he made an apologize to Rahul while batting. “I apologised to him while I was batting #kxipfriends” Maxi’s reply read.

I apologised to him while I was batting 😂 🦁 🙏 #kxipfriends ❤️

The tweets of Neesham and Maxwell garnered huge reception from the fans of India. Check out some of them below :

Not even one six in ipl 🙃

That’s a difference when you play for money and play for the country. 😎

Rahul behind the stumps 😂😂 pic.twitter.com/HI74yCSQK6

you both will be released from squad soon….
see you at 2021 auction😂😂

Previous articleBalaji Murugadoss Caught On Camera While Kissing Shivani ?? WATCH
Next article“This Is Why My Son Missed These Films” – Veteran Filmmaker Opened

A 11 minute long leaked audio on a female teacher named Kalaiselvi alking about caste to a student and encouraging him to discriminate other...