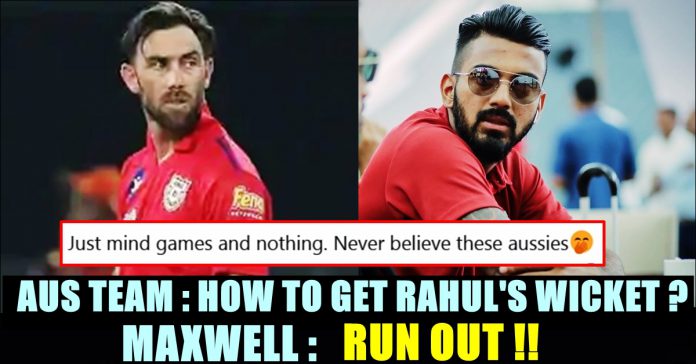 With just a week to go for the inauguration of Australian series, players of the five time world cup winning team are gearing up to defeat the strongest side of world cup it seems. Reports suggests that they have already began their preparations for the series and team meetings are taking place to deal with the powerful batting order of the blue team, it seems. Recently, Glenn Maxwell, prominent all rounder of the Australian team has revealed what they asked him in the team meeting. The cricketer also made his reply public which is making headlines now.

Glenn Maxwell and KL Rahul had shared the same dressing room during the cash-rich IPL tournament in which Rahul received the orange cap for scoring the highest number of runs in the tournament. The Karnataka based cricketer who captained the team, gave his everything to enter the playoffs but failed. Maxwell tried his best but couldn’t give it all for his team as well.

Now, in the team meeting conducted by the Australian cricket management, Maxwell was asked to discuss about the flaws of his Punjab team captain. However, the 32 year old who awed Rahul’s terrific batting form in recent times, reportedly said that getting him out while running between the wickets is the only way to send him back to the pavilion.

“He (Rahul) was a gun. We had a team meeting the other day and they came to me and asked how I thought we should get him out, and one of things I said was try and run him out,” said Maxwell to the media. “So I think that’s what we’re going to try and do the whole way through the series, try and run him out and hope for the best” he added.

Maxwell said that very few can handle pressure situation better than him. “He’s a great performer… got a great temperament, great head on his shoulders and is extremely calm in pressure situations,” the aussie stated.

This statement from the allrounder made fans to speculate many things. When an online user said that Maxwell is trying to grab a place in the Punjab team despite of his poor performance in IPL 2020, another user said that Aussies started playing mind games to make Indian players feel over confident.

This time around the Aussie tactics are different. Hell bent on buttering Kohli & Indian team. 😂

Just mind games and nothing. Never believe these aussies🤭

Seeing quite a lot interviews of Australian players saying this saying that…. except of Pujara haven't seen any Indian player speak up as yet…uneasy calm for us viewers