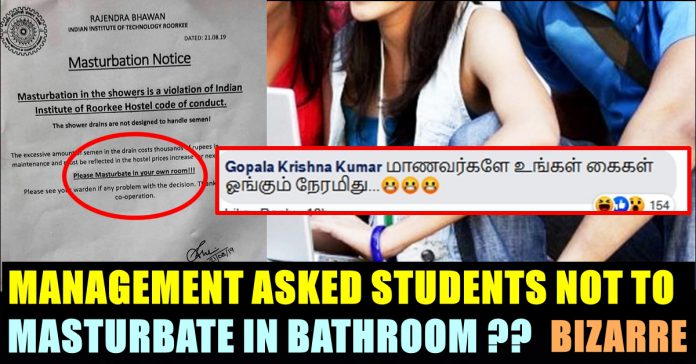 Initially we thought it is just a Whatsapp forward which is made for fun until we saw this post from News7 Tamil . Check out their post here :

This news is going viral and getting enormous number of reactions from the social media platforms. Check out some of their reactions here :

Some bad news for guys here , can happen in other institutes 😆 #iitroorkee pic.twitter.com/2s301TpsK8

However, it has been confirmed that it is a fake news by few of the tweets posted by the students of the university itself.

No!
It's a false notice put up by some mischievous students.
Kindly refrain from believing and sharing such news.
Kindly delete it as it leads to confusion and spread of propaganda by external sources.
I'm a student at IITR so I can confirm this.
Thanks and Cheers! ✌️

What do you think on this bizarre fake notice being circulated ?? Comment your views below !!

Previous article4 Men Including A DMK Member Raped A Mentally Ill Teen In Trichy !! HORRIFIC !!
Next articleRandom Instagram User Proposed This Popular TV Actress For “Dating” !! Check Out How She Responded !!