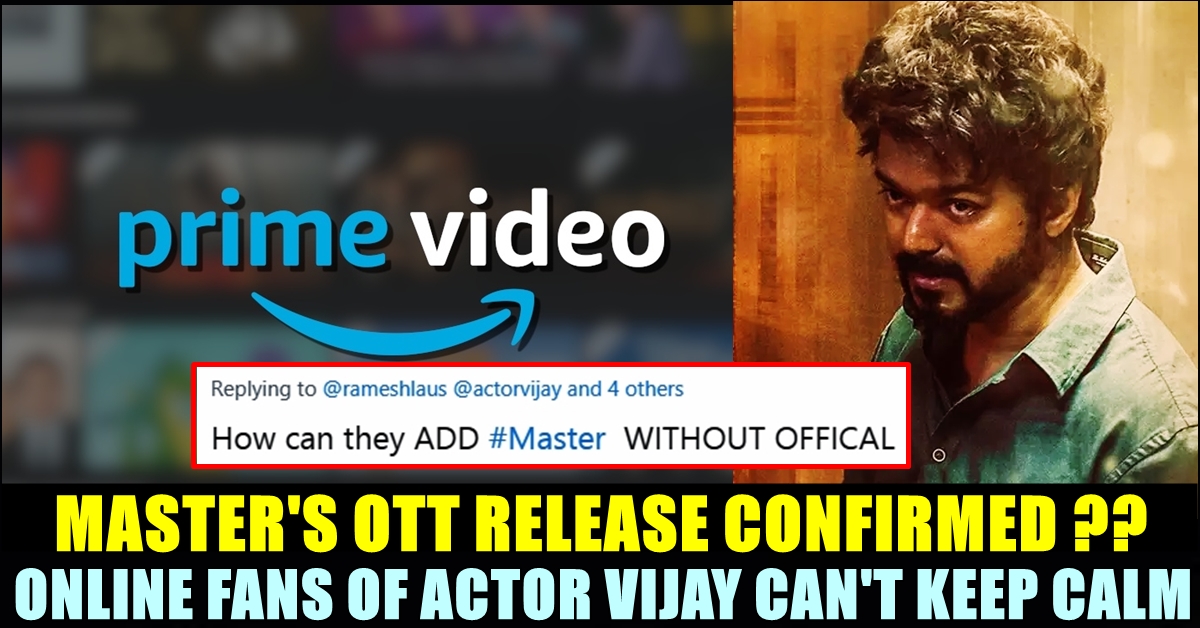 With fans reacting in various ways for actor Suriya’s decision on releasing “Soorarai Pottru” on OTT, a strong buzz did rounds on actor Vijay’s upcoming film “Master” also being released in the same platform. However, fans flooded the old videos of Producer Xavier Britto and director Lokesh Kanagaraj firmly saying that the film will not be released in OTT and brushed off the rumours.

Dhanush-Karthik Subbaraj’s “Jagame Thanthiram” and Vijay-Lokesh Kanagaraj’s “Master” are the two other films that are highly expected to get a theatrical release post lockdown. These films are believed to bring the audience back to the theatres who are currently terrorized to step out of their homes due to the spread of the deadly virus COVID 19.

“It is impossible for the film to get an online release as the film is made of a huge budget. Vijay is also very firm on releasing the film only on theatres” Britto said in an earlier interaction with Vikatan youtube channel.

However, Times of India’s today’s publication has added actor Vijay’s “Master” in the list of OTT films which created unrestness in the micro blogging social media site. Along with previously released “Ponmagal Vanthal”, “Penguin”, “Cocktail”, “Danny”, “RK Nagar”, “Lock Up”, the piece which was written in the reputed newspaper added “Andaava kanom” and “Master”.

Check out their piece here :

There is also a poster doing rounds saying that the Vijay starrer is going to release on 14th of November. Movie tracker Ramesh Bala uploaded it in his official twitter account saying “TOI has added #Thalapathy Actor Vijay’s #Master as an OTT release in today’s newspaper.. Till now, there is no official word.. Not sure, this is correct info..” by tagging the news paper and producers Jagadish and Lalit of silver screen.

Till now, there is no official word..

While fans of actor Vijay are outraged on seeing this news, a majority number of people supporting the OTT practice believing that it is going to be the next big thing in streaming films in future. Fans even asked how Times of India could add such information with no official word from the production house. Check out some of the reactions below :

As a die hard Thala fan we want Soorarai potru &Master in theatres only pls consider don’t play with fans emotions. we wait untill next year also for our fav star movie to celebrate in theatres…#Valimai

How can they ADD #Master WITHOUT OFFICAL CONFORMATION…. I wish THE MOVIE WILL RELEASE IN THEATER FIRST THEN OTT

Till Now There is no official statement from #Master Team, But we have the words @Dir_Lokesh tells, there is no ott release for #Master. It releases only in theatre.
Then whats point in this 😬😏

Varum… Kandipaaa… This corona thing will end only aft 2 yrs… Ena panuvinga? 🤔 There’s no other option.

Master was supposed to release on 9th of April and was postponed without further notice due to the COVID 19 pandemic. As Suriya decided to release his most expected “Soorarai Pottru” on OTT, other films are also expected take the same decision.