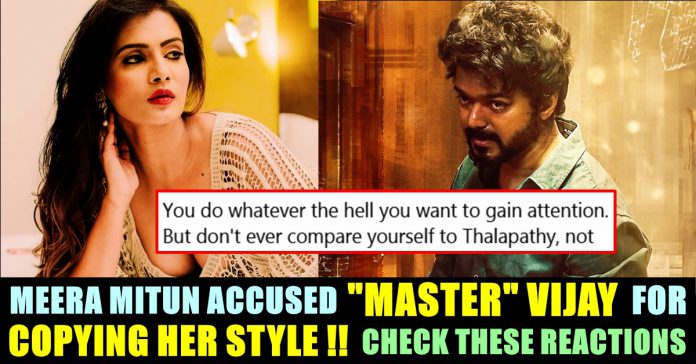 Meera Mitun indirectly said that Master’s first look was copied from her pose for a photoshoot. She posted the picture and asked who copied whom, in a way of mocking the second look poster of Vijay’s upcoming film “Master”. “Who copied Whom. Well this is my kingfisher ramp after show pics dec 2k19. So answer known lol” Meera Mithun wrote by tagging Master movie page and with the hashtag Master audio launch.

Who copied Whom 🤪 Well this is my kingfisher ramp after show pics dec 2k19 😉😎 So answer known lol 👻 @MasterMoviePage #MasterAudioLaunchDay pic.twitter.com/m2rCkMzbbX

Earlier Meera Mitun slammed models and actresses for copying her by conducting photoshoots unnecessarily. If you are aware of Bigg Boss show’s third season in Tamil, you must have known about Meera Mithun , one of the most controversial participant of the show. One of the highly controversial episode of the season is undoubtedly the one in which Meera Mithun accused Director Cheran of physical harassment.

On seeing the post of Meera Mitun, many fans started trolling her for comparing herself with one of the toppest actor of Kollywood. Check out some of their comments below :

in all Pre-KG Schools, this pose only students give when teacher says " finger on the lips " . Now who copied whom?

You do whatever the hell you want to gain attention. But don't ever compare yourself to Thalapathy, not even in your dreams. You're like the Corona virus. Just don't spread your virus to anyone. Jeez lady

Followed by her Bigg Boss stint, Meera Mitun involved in many controversies and several audio conversations of herself with her accomplices leaked. She was removed from movies like Namma Veetu Pillai, Agni Siragugal for various reasons. In one of her interview, Meera Mitun even alleged that all the boys who participated in Bigg Boss show loved her.

She even compared herself with top actresses such as Nayanthara and Kiara Advani in her previous posts. (Also Read : Lady Superstar Nayanthara Copied Meera Mitun ??) Comment your views on this post of Meera Mitun !!

Famous Actress Warned Online Users Not To Call Her As “Aunty” !!