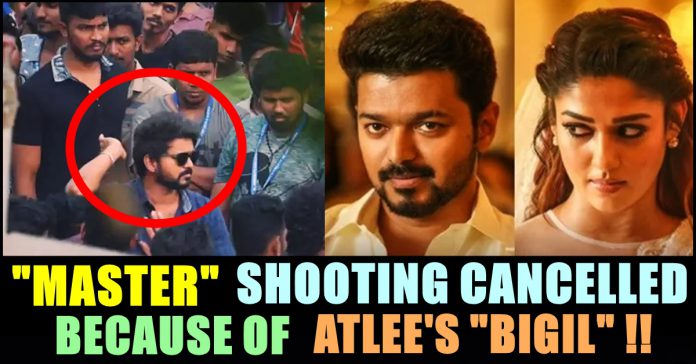 The shooting of the film took place in various places and faced so many problems so far including the pollution of Delhi city. Now, the film which is going on floors on coal mine in the Neyveli Lignite corporation, stopped due to the visit of Income Tax officers who breached into the spot to inquire actor Vijay. According to reports, the actor is currently being questioned by the officers.

IT department officers who took away Vijay for questioning from the shooting spot., issued him a summon. Due to this unexpected visit, the shooting for the day was cancelled and is expected to resume tomorrow. Reports suggests that IT Raid is taking place since Wednesday morning to inquire about the properties associated with AGS Entertainments across 20 different locations.

“Bigil”, the last film of actor Vijay was produced by AGS entertainment with 180 Crores of budget. Archana Kalpathi of AGS entertainment acted as the creative producer of the film. Vijay is being questioned by Income tax officers regarding this issue and Vijay’s salary for the film has came under scanner. The latest report suggests that his house and bank lockers were searched in his presence.

Sources : In continuation of IT searches, Actor Vijay who is in a shooting at Neyveli is being brought back to Chennai by IT authorities. In the presence of Vijay, his house and bank lockers also will be searched, add sources.

It is notable that there was a rumour surfaced on Bigil’s budget exceeding its limit due to director Atlee. However, this visit of Income tax department has created furore among the fans of the actor. Few months ago, the film “Master” commenced with a customary pooja in Chennai with Vijay, Vijay Sethupathi, Malavika Mohanan and Shanthanu Bhagyaraj and the rest of the crew in attendance. Directed by Lokesh Kanagaraj, the film is touted to be a gangster flick with Vijay Sethupathi playing the villain.

Few fans even started posting positive memes to stretch their support to the actor.

Comment your views on these reactions of the fans of the actor !!

Previous articleFan Tried To Interact With Rajinikanth In Airport !! WATCH What Happened
Next articleAfter Mersal, Sarkar H.Raja Trying To Promote This Film ??

Suchithra, one of the evicted contestants of the ongoing Bigg Boss show, has conducted a poll in her official Instagram account, questioning whether Bala...

The peaceful people’s protest against Sterlite Copper in Thoothukudi became violent on its 100th day, leading to the killing of 13 persons in police...