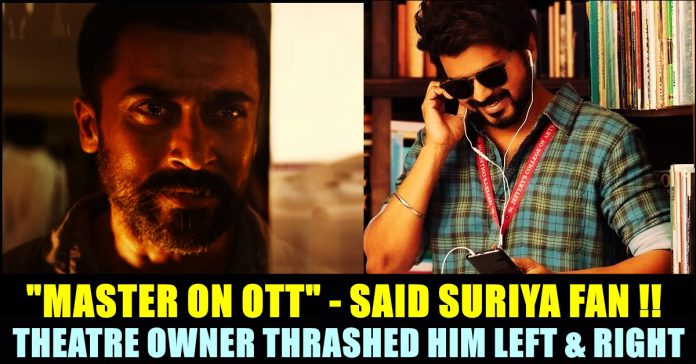 After TN minister Kadambur Raju said that theatres in Tamil nadu will not have reopen in anytime soon, fans of Tamil cinema are reacting in various ways. The minister announced it after central government recommended states to open theatres from 15th of October. It is notable that the TN government has granted permission to resume with the shooting of films earlier last month.

It has been over 7 months since the theatres shut down in Tamil nadu. When central government recommended the states to reopen theatres from 15th of October as a part of Unlock 5.0, the TN government has decided not to open it due to the increasing number of COVID 19 positive cases. The state has been reporting at least 5000 cases per day in daily basis. Minister Kadambur Raji, in an interaction with media, has said that they denied permission to open theatres in Tamil nadu.

Films such as Vijay’s “Master”, Dhanush’s “Jagame Thanthiram”, Ranveer Singh’s “83” are some of the high profile Tamil films that are waiting for the theatres to reopen to get released. Meanwhile, makers of Suriya’s “Soorarai Pottru”, Nayanthara’s “Mookuthi Amman” have decided to release their films in OTT platforms.

Announcing about Soorarai Pottru’s release in his official twitter account, actor Suriya who also produced the movie, stated that the COVID 19 pandemic is the main reason behind his decision. The actor also pledged that he will complete acting in at least two films before the pandemic ends and will make people happy by releasing them in theatre. He also announced that he will be donating Rs.5 Crore to the people who are fighting against COVID 19 from the money he got for releasing “Soorarai Pottru” in “Amazon Prime”. The film is set to release on 31st of October.

On seeing the announcement of Minister Kadambur Raju, a fan of actor Suriya, shared the tweet and added a hashtag saying “Master On OTT”. He tagged the owners of Rohini theatre and Ram Muthuram Cinemas. He also uploaded a meme template to mock the scenario that “Master” currently cauht in.

Replying to the tweet, the official twitter handle of Ram cinemas asked the twitter user why he wants “Master” to release on OTT. He who said that it is not going to happen at all, asked him to watch the movie he like in OTT. “Why are you involving in such things?” he asked.

Btw Why mentioning Master on OTT?
Why you badly want it to release in OTT which is not going happen at all? 😂
Enjoy the movie you like on OTT brother edhuku indha velai ellam https://t.co/O6fP1Ma8oh

This reply tweet from the theatre admin, garnered positive response from the fans of actor Vijay and received harsh comments from Suriya fans. Check out some of them below :

Comment your views on this reply of Ram cinemas !!

Previous articleAshwin Narrates The “Mankad” Incident In A Most Hilarious Way !! MUST WATCH
Next article19 Year Old Brahmin Girl Married A Dalit Man !! Father Of The Bride Took Shocking Decision

8 British Era Dishes That Are Still Served in Chennai : Must Try !!

Colonial era hotels like The Vivanta by Taj - Connemara, Chennai and the Taj Westend, Bengaluru have tried to keep the interest around this...