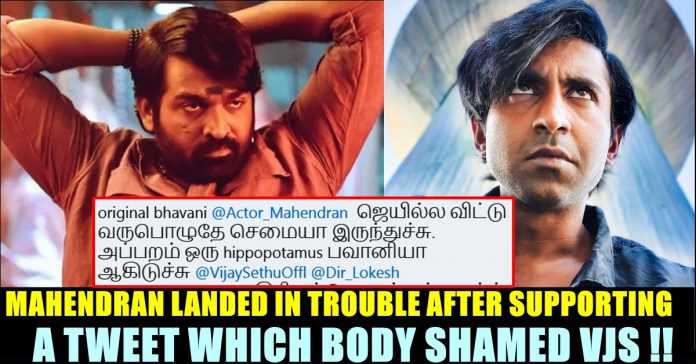 Actor Mahendran who recently garnered huge reception from fans and critics for the way he played the role of “Bhavani” in “Master”, has been pretty much interactive with his followers in social media platforms. In his twitter timeline, the actor who has been acting since his childhood, is sharing the video edits, mash ups, designs, illustrations, appreciation posts that were uploaded to praise the role he played in “Master”. Most recently, a reply tweet he made to a twitter user left him in trouble among the twitter user but the actor, immediately came up with a clarification tweet and cleared the air.

“Master” which showed Vijay as an alcoholic professor, contains Vijay Sethupathi, Arjun Das and Malavika Mohanan as a gangster, henchman and a college professor respectively. Locking horns with John Durairaj played by actor Vijay, Vijay Sethupathi who represented Bhavani, comes as a ruthless killer who uses juveniles as his pawns to establish his criminal enterprise.

In the film “Master” Mahendran played the younger version of Vijay Sethupathi. Audience and critics heaped praise for the actor who has been working in the industry since very long time. Now, a follower, to praise the acting skills of Mahendran, a follower came up with a tweet making derogatory comments of actor Vijay sethupathi.

He who body shamed actor Vijay Sethupathi by comparing him to a “hippopotamus”, asked Lokesh Kanagaraj to give opportunities to all the artists like Karthick Subbaraj. Check out his tweet below :

Without giving much attention to the tweet, Mahendran thanked the follower and asked him to keep supporting. “So sweet of you brother tnks a lot for your love and support” his reply read.

As soon as the reply tweet of Mahendran surfaced, followers started slamming him for supporting a tweet which consisted derogatory comment. However, within minutes, Mahendran came up with a clarification tweet saying that he didn’t read the tweet properly and sought apologies.

“Nothing wrong in you people criticizing me as I should have read the tweet properly.” he said in his tweet. “Hey sorry guys naan last tweet ah sari ah paakala and more over neengha thittunadhum ennaku onnum thappa therila coz naan aada correct ah padichirukanum it’s a learning experience for me once again sorry guys so much love” his tweet read.

A fan of actor Vijay asked whether he is weak in English language and the actor replied saying “Aama pa” in a light manner.

Previous articleSelvaraghavan Sought Apologies After His Video Went Viral !!
Next article44 Year Old Pragathi Gave Back To A Guy Who Trolled Her Fitness Video !!

India's first attempt to land on the Moon may have gone off-script but the ambitious Chandrayaan 2 mission has been far from a flop....